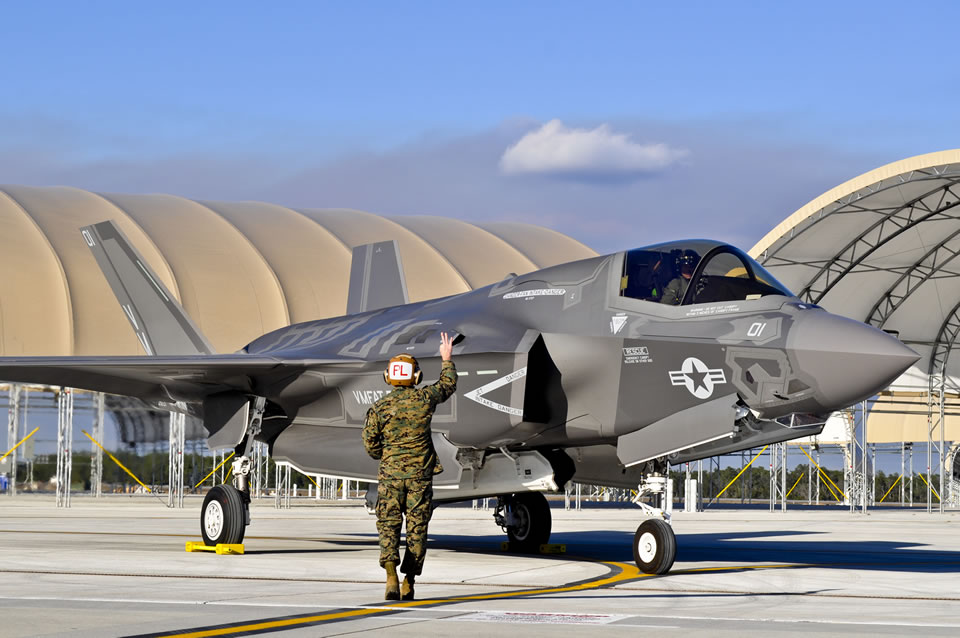 On Tuesday February 28 officials at the US Air Force Aeronautical Systems Center issued a Military Flight Release (MFR) that will allow the F-35A Lightning II fighter to begin initial operations at the joint training center at Eglin AFB, Fla.

Until this MFR all F-35 flights were restricted to test flights, conducted only by qualified test pilots, at the California based Edwards Air Force Base and Naval Air Station Patuxent River flight test centers. All F-35s delivered to Eglin since summer 2011 were practically grounded at the base, awaiting the MFR clearance. With MFR now in place, qualified Air Force, Navy and Marine Corps pilots and later, also trainee pilots will be able to fly the F-35, beginning with the Conventional Take-Off and Landing (CTOL) F-35A variant. Until now, these pilots were restricted to perform taxi tests and simulator flights but could not take to their fighters to the air. According to Defense News, Eglin currently has two test pilots who are qualified to fly the jet: Air Force Lt. Col. Eric Smith and Marine Maj. Joseph Bachmann.

The decision was reached after an airworthiness board conducted an assessment that evaluated potential risks and the corresponding mitigation actions to conduct unmonitored flights. The Air Force consideres flying the Air Force variant of the Joint Strike Fighter will increase pilot and maintainer familiarity with the aircraft, exercise the logistics infrastructure and continue to develop aircraft maturity. These initial F-35A flights will be limited, scripted, conducted within the restrictions and stipulations of the MFR and flown by qualified pilots, the announcement said.

“The Air Force, Joint Strike Fighter Program Office and other stakeholders have painstakingly followed established risk acceptance and mitigation processes to ensure the F-35A is ready. This is an important step for the F-35A and we are confident the team has diligently balanced the scope of initial operations with system maturity,” said General Donald Hoffman, commander of Air Force Materiel Command, the parent organization of ASC.

The assessment was conducted with airworthiness engineering subject matter experts within ASC and was fully coordinated with the F-35 joint Strike Fighter Program Office, Air Education and Training Command, and other expert participants. The Air Force is confident the aircraft is ready to fly in a safe and efficient manner, Hoffman said.

Smith and Bachmann will act as the initial instructors for the rest of the cadre at the 33rd Fighter Wing. The three services have selected some of the best, most experienced pilots to form the initial batch of instructors at Eglin. The Marine Corps expects  pilots to start flying the F-35B in late March after the Naval Air Systems Command completes an independent safety audit.