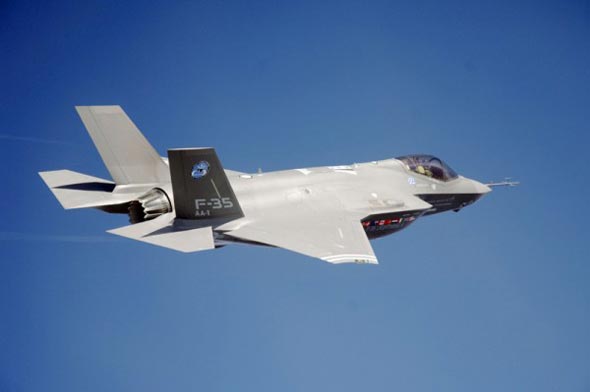 The F-35 Lightning II aircraft brings new capability to the US Air Force, Navy and Marine Corps. It will also serve as a centerpiece for the leading international air forces. In addition to the United States, the F-35 program has eight other partners. Those partners include the United Kingdom, Italy, the Netherlands, Turkey, Australia, Norway, Denmark and Canada. Additionally, both Israel and Singapore have come aboard as security cooperative participants.


The F-35 will be produced in three variants, including a standard-take-off-and-landing version (A), a short-take-off-and-landing version (B) and a carrier variant (C) for use by the Navy. The F-35 will fly both suppression of enemy air defenses and destruction of enemy air defenses missions. Additionally, it will be tasked with counter-air, strategic attack, close air support and defensive counter-air missions. The US Air Force is expected to start taking delivery of F-35A aircraft in 2009, with planned deliveries continuing beyond 2025.

The F-35C will be the US Navy’s first stealth aircraft. It is designed to replace the F/A-18 Hornet and complement the newer F/A-18E/F Super Hornet. While it shares its fundamental design with the F-35A (conventional takeoff and landing) and F-35B (short takeoff/vertical landing), the F-35C is specialized for the catapult launches and arrested recoveries of large aircraft carriers. It features 30 percent more wing area than the other two variants, larger tails and control surfaces, and wingtip ailerons – all contributing to the precise slow-speed handling characteristics required for carrier approaches. The F-35C’s internal structure is strengthened to withstand the punishment of repeated catapult launches and arrested recoveries on the carrier deck.

The F-35C – the Carrier Variant (CV) is also progressing, with Critical Design Review (CDR) completed in June 2007. According to Terry Harrell, Lockheed Martin director of F-35 carrier variant development, in the past seven months the aircraft removed more than 200 pounds of weight while meting its objectives for detailed design and performance.

Funding for the first two production-model Lightning IIs is approved, parts fabrication for these aircraft is under way and component assembly will begin later in 2007. The USAF will be the first service to receive the F-35A. The first of the service’s 1,763 aircraft will be delivered in 2010. The U.S. Marine Corps and Navy together are planning to operate 680 F-35Bs and F-35Cs, and the United Kingdom plans to place 138 F-35Bs into service with the Royal Air Force and Royal Navy. The remaining F-35 participant countries plan to acquire from 600 to 700 aircraft, and further international sales are expected to create a demand for hundreds more aircraft.

By February 2007 all the multinational program members (except Denmark) have reinstated their support of the program by committing to the next phases of development. Canada, the United Kingdom and Australia have committed to the project’s Production, Sustainment and Follow-on Development (PSFD) phase, allocating additional funding for the program. On April 19, 2007 the US Under Secretary of Defense (Acquisition, Technology, and Logistics) released full funding for two Conventional Take-Off and Landing Variant (CTOL) F-35 aircraft in Low Rate Iinitial Production (LRIP) Lot 1, and long lead funding for the six CTOL and six Short Take-Off and Vertical Landing (STOVL) variants in Lot 2.

By the first week of February 2007 the first F-35 Lightning II (AA-1) performed seven test flights since its inaugural flight December 15 and has successfully tested a wide range of aircraft systems and demonstrated uncommon reliability. The aircraft so far has flown at 23,000 feet and achieved speeds of Mach 0.8 and a 16-degree angle of attack. The flights also served to calibrate the air-data system while evaluating basic maneuvering with the landing gear both retracted and extended. On the fifth flight, F-35 Chief Test Pilot Jon Beesley lit the afterburner for the first time and unleashed 40,000 pounds of thrust — more power than any fighter engine in history. The airborne tests also have evaluated the speed-brake function, the fuel-dump process, the approach power compensator (an auto-throttle mode for landing), and tests of the radio, communication and navigational systems. Revolutionary internal systems on the aircraft have performed exceptionally well, including unique actuators that drive control surfaces primarily using electricity instead of a hydraulic system. Another device that for the first time combines the engine starter, the generator, the emergency power supply and the environmental-control system into a single unit also has continued to operate successfully. According to Brig. Gen. C.R. Davis, F-35 program executive officer “early flight test results show we are on a path to largely validate the design and aircraft systems — we are not entering a period of discovery.” By April 23, the aircraft completed 14 test flights, gradually opening the flight envelope reaching an altitude of 30,000 feet, speed of 0.8 Mach, and 16 degrees Angle of Attack.

F-35 avionics are being flight tested on the Cooperative Avionics Test Bed (CATBird), a highly modified 737 designed to validate that the complex, highly integrated avionics suite has satisfied all test objectives within its initial flight-clearance envelope. Sofar “CATBird,” completed eight test missions and logged 24.8 hours, and is now poised to receive additional flight clearance. CATBird will develop and verify the F-35’s capability to collect data from multiple sensors and fuse it into a coherent situational awareness display in a dynamic airborne environment. Testing of the helmet mounted sight and display (HMDS) is planned to begin soon, as soon as the new system is certified to fly on the F-35.

Static tests of the different variants of the F-35 are already underway. The first static test aircraft for the STOVL variant was delivered earlier in 2008 and has successfully completed a third of its planned test program in Fort Worth. Construction of the second ground-test aircraft completed on December 08. Currently, the aircraft is being instrumented and will be shipped to the UK by March 09 for testing. The aircraft (called AG-1), is a full-scale static test article for the conventional takeoff and landing (CTOL) variant. Dan Crowley, Lockheed Martin executive vice president and F-35 program general manager explained that the AG-1 will be subjected to twisting, bending and pulling forces to validate that the CTOL variant’s structure can sustain all the forces and loads exerted during flight, progressing flight testing toward the CTOL’s full nine-G performance envelope.”

To address th epotential sale of JSF to air forces and countries which were not part of the original development agreement, the USAF and Lockheed Martin have launched the ‘JSF Delta System Development and Demonstration’ effort (Delta SDD). The purpose of the Delta SDD is to develop a version of the JSF Air System that meets U.S. National Disclosure Policy, but remains common to the U.S. Air System, where possible.

In November 2007 Lockheed Martin was awarded additional $134 million modification to its JSF development contract, to perform design, development, verification, and testing of JSF versions designed to address ‘Partner Version Air System’ requirement. This program adresses the potential sales of the aircraft to nations that did not sign the partners agreement, but want to receive the aircraft and adapt it to their requirements.

Development and testing of the JSF Delta SDD is expected to complete until October 2013, with first availability of export aircraft to non-pantner countries. 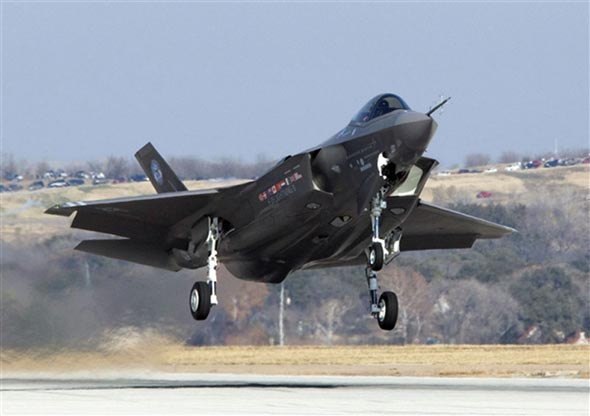 The first F-35 Lightning II Joint Strike Fighter took off on its initial test flight from Lockheed Martin in Fort Worth, Texas on 12:44 December 15, 2006 piloted by the program’s Chief Pilot Jon Beesley. The aircraft was airborne 35 minutes on its maiden flight. the jet lifted off and began a climb-out to 15,000 feet. Beesley then performed a series of maneuvers to test aircraft handling and the operation of the Pratt & Whitney F135 turbofan and subsystems. Dan Crowley, Lockheed Martin executive vice president and general manager of the F-35 program, said the aircraft has continued to meet or exceed expectations during its assembly and pre-flight checkouts. It has now embarked on a 12,000-hour flight-test program designed to validate tens of thousands of hours of testing already completed in F-35 laboratories.