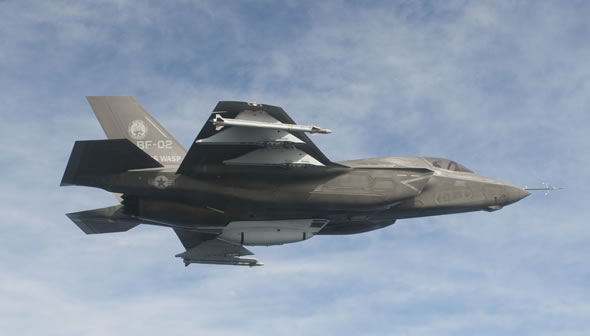 Recently, the UK Ministry of Defence announced that it was changing its Procurement decision on the Joint Strike Fighter, the Lockheed F-35 Lightning II, from the STOVL F-35B to the CV F-35C, with a planned order of 50 aircraft.

It was deemed that the extra payload and range capability of the F-35C, coupled with the larger deck size of the new carrier provided a cost-effective procurement compared with the F-35B. Both options have risks – for the carrier, the Brits have yet to integrate either electromagnetic rail launch and conventional arrester gear or the CATOBAR (Catapult Assisted Take Off But Arrested Recovery. As for the STOVL option, currently, only the United States Marine Corps (USMC) is definitely (if there is such a word in Defence Procurement) slated to receive this model.

Facing the growing cost of the carrier program, partly because the UK MOD ‘forgot’ about the ski jumps on the Queen Elizabeth carrier, costing £1.2BN to remove, and the difficulties experienced with catapult launch, there is a new ‘Plan’ to revert back to the F-35B! This is on top of the dismal FAILURE of the F-35A to carry out its first sortie from Eglin AFB, owing to (yet another issue) a fuel leak.

2012 should have seen the arrival in the UK of a limited quantity of F-35C aircraft, for evaluation. The Planned In-Service Date (ISD) for the Queen Elizabeth carrier and the ‘stealth’ F-35C aircraft is 2020, but this might be at risk because of programme delays in the F-35C, not least of all in the arrester hook problems, and the likely inability of the F-35C to fire the UK’s standard Advanced Short-Range Air-to-Air Missile (ASRAAM), as will be fitted to the UK fleet of Eurofighter Typhoon aircraft.

The F-35 Procurement is the US DoD’s largest procurement programme (with an individual aircraft costing in excess of US$150M, more likely US$280M for the complete production run) the program represents a Total Fleet Life-Cycle Cost Estimate of possibly in excess of US$1Trilion (US$1,000Bn). This, for what was advertised as an affordable, capable, stealth fighter for the US and its allies, has now been revealed to be the most expensive fighter aircraft ever developed, with increased size and weight (and consequently reduced capability), and “stealth” compromised by the design and also the external ordnance hard points as fitted to earlier aircraft (certainly not in the league of the F-117 stealth fighter).  This is such a change that it could almost be regarded as an update to an F-16, or the F-22 Raptor – only noisier. Now, being a Radar and EW Engineer by background, I have to confess that the JSF F-35 looks anything BUT a ‘stealth fighter’.

Can the UK afford such procurements? It is understood that even the offsets originally envisaged have been ‘blown’, with the F-35 using Pratt and Whitney F135 engines instead of the Rolls-Royce/GE consortium F136 engines.  What’s more, as the ‘all-knowing’ UK MoD has now decided that the first new Carrier will be mothballed immediately after production, and the second Carrier will only carry one wing (not even a Squadron) of F-35’s (plus 2 in reserve), what is the point of the UK MoD’s Carrier ‘Fleet’? No wonder that the UK and Japan are in discussions about Joint Production/Procurement – after all, the Japanese know that the UK can manufacture good products, hence the plan for Nissan to produce its new car series in the UK.

However, contrast this with the UK’s current demonstrator Unmanned Air Vehicles, Taranis (a large stealth UCAV), about which BAE Systems are keeping the details a closely-guarded secret,  and the European (German-led) Baracuda,; and then there is the BAE Systems Mantis, the European Neuron UCAV, the Talarion Medium Altitude Long Endurance (MALE) surveillance UAV. To my mind, most of these appear to be ‘Stealth’ designs. (Having seen, at extremely close quarters the last flying Avro Vulcan bomber… which overflew my house not too long ago, I think that I know ‘stealth’ when I see it.*)

In addition, there is the Thales/Elbit Watchkeeper, for the UK Army which is a joint UK/Israel UAV intended for airborne surveillance of the battlefield which is entering service. In addition, as seen, there are the existing and future European UAV/UCAV programmes and also the US programmes… and just about every ‘developed’ nation with defence needs and strategies have commenced their own UAV/UCAV programmes.

The UK has long been participating in Unmanned Aircraft programmes, including the Unmanned Combat Aircraft (UCAV) and is proceeding ahead of many other nations, via the auspices of the Civil Aviation Authority in programme ASTRAEA (Autonomous Systems Technology Related Airborne Evaluation & Assessment), running from 2006 until 2013 with a £62M budget, to de-risk the operational use of UAVs/UCAVs operating in (Civil) Controlled Airspace.

This programme, which involves the cooperation of Industry and Government, has the following key industrial members: Agent Oriented Software (AOS), BAE Systems, Cassidian, Cobham, QinetiQ, Rolls-Royce and Thales. In addition, many of the most innovative small companies in the sector, leading academic minds and the UK regulatory authorities are integral to the programme.

The two principal areas being addressed are:

Separation Assurance & Control – the particular technologies required to control the flying vehicle in the airspace from the ground control station the spectrum, security and integrity of the communication system and the vehicle’s sense and avoid sensor system.

Autonomy & Decision Making – providing the intelligence in the vehicle through a ‘variable autonomy system’, that shares decision making for the mission and contingency management with the human operator.

Integral to these project areas are “Autonomous Sense and Avoid”, a ‘first’ in aviation technology.

ASTRAEA has already been successful in terms of government/industry collaboration, which has resulted in the UK being recognised as the leading national authority on future autonomous UAV operations in controlled airspace.

So, what will be the impact upon future (UK) combat aircraft procurement? There is already a precedence set in the USA – in 2005, the percentage of UAVs deployed was just 5% of the US Military Aircraft. At the beginning of 2012, that number had risen to 31% (according to a US Congressional Research Service report).

Given that the UK has set a strategy to keep operational all new air systems for circa 40–50 years, what value can be seen in further expensive manned combat aircraft? The UK has demonstrated its ability to monitor, and if necessary, control the flight of an unmanned aircraft from the console of an accompanying manned aircraft (QinetiQ with a BAC-1-11 and a manned Tornado, using AOS agent software). The UCAV and UAV demonstrator programmes will evaluate remote monitoring via satellite links. So, in 2070, an Interceptor/Attack squadron could conceivably be formed entirely from UCAVs with a stand-off Mission Control aircraft. Cheaper Procurement, more versatile attack profiles (no need to worry about a pilot ‘blacking out’ at high g manoeuvres, fewer pilots required (with major impact on training budget), greatly reduced ‘body-bag’ count …

… has somebody got a calculator? This seems to be an extremely cost effective Future Air Force – or is there something that we don’t know about? Most importantly, it would seem that the US DoD and the UK MoD simply just don’t know what to do. Having read a Defence Procurement paper recently, I was just about to say, “Just as I expected” when I realised that it was a Defense (USA) Procurement paper.  Oh, **** !

Meanwhile, China continues to expand its forces, with Chinese warships operating new UAVs at sea, back in 2011, and with anticipated ‘carbon copies of the US Predator and Global Hawk’, it doesn’t take a genius to anticipate that China will soon have UCAV technologies, flying, to accompany their extremely large fleet. China has been offering for sale helicopter UAVs (such as the U8E), China also offers fixed wing UAVs, which are currently about a generation behind Western models (which is the usual Western policy, so no change, there!). The Chinese are willing to compete on price, but most heavy UAV users still prefer American or Israeli models – at present.

No wonder that the USA now plans to virtually leave the Atlantic ocean, and concentrate on the Pacific ocean.

(* Particularly as a UK Engineer ran the US Stealth Aircraft programmes – as I was informed by Cranfield College of Aeronautics, who trained the person concerned.)