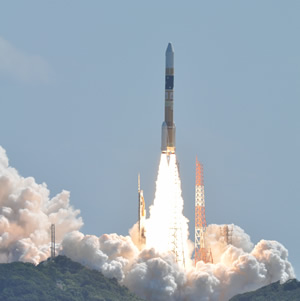 With a flourish in launching four satellites aboard a single launch vehicle, Japan gave the world notice that it is now prepared to compete in the international space cargo business. This launch was the first time a foreign satellite was carried aloft by a Japanese rocket.

In the early morning hours of 18 May, a Japanese H-IIA/202 rocket lifted off from the Japan Aerospace Exploration Agency’s (JAXA) Tanegashima Space Center on Tanegashima Island in southwestern Kagoshima Prefecture carrying three Japanese satellites and one from South Korea.

Japan’s Global Change Observation Mission – Water Satellite 1 (GCOM-W1), nicknamed Shizuku, was the largest of the three Japanese satellites aboard the rocket. The Shizuku (a Japanese word meaning “drop” or “tear drop”) will fly a Sun-Synchronous Orbit at an altitude of 700 kilometers and is expected to have a lifespan of five years. An Earth observation satellite, Shizuku is designed to monitor water-related events as part of an international collaboration to collect data associated with global climate change. It is equipped with an enhanced microwave system, known as the Advanced Microwave Scanning Radiometer 2 (AMSR2), capable of detecting a wide-range of radiometers, naturally occurring microwave emissions emanating from Earth, which can then be used to analyze significant environmental changes.

A second device, a Second Generation Global Imager (SGGI), is also aboard Shizuku. The SGGI is designed to measure atmospheric and surface changes related to variations in climatic conditions and will collect data from observations of cloud formations, vegetation, snow accumulations, and ice fields.
Two smaller Japanese satellites were also along for the ride aboard the H-IIA/202 rocket. The Small Demonstration Satellite-4 (SDS-4) is a 50-kilogram satellite designed to test innovative new technologies that may be placed in operation aboard functional satellites in future launches. The second small satellite, Horyu-2, is a microsatellite designed by students with Japan’s Kyusyu Institute of Technology weighing only 7.1 kilometers. Horyu-2 will fly at an altitude of 680 kilometers with a primary focus on efforts to generate 300 volts of photovoltaic power, a photovoltaic power level never achieved in space previously. The Horyu-2 is also fitted with an Earth observation camera and a debris sensor.

The fourth satellite aboard the H-IIA/202 was South Korea’s Kompsat-3 (Korea Multi-Purpose Satellite-3). The Kompsat-3, also known as Arirang-3, is reported to be a lightweight Earth observation satellite equipped with an enhanced high-resolution optical sensor. It will follow a Sun-Synchronous Orbit (SSO) at an altitude of 685 kilometers and has an estimated lifespan of four years.

The Kompsat-3 was developed by Korea’s Aerospace Research Institute at a cost of an estimated $240 million following five years of intense research and development. The satellite is equipped with a multispectral camera capable of delivering imagery of 0.7-meter maximum resolution co-produced by EADS Astrium and the German Aerospace Agency. This camera is expected to provide high-resolution electro-optical (EO) images in support of Geographical Information Systems (GIS) for the purpose of monitoring agricultural, environmental, and oceanographic conditions.

JAXA confirmed that all four satellites entered orbit as planned and no equipment malfunctions were detected. The H-IIA rocket has been Japan’s most successful launch vehicle having recorded twenty launches since 2001 with a ninety-five percent success rate. Industrial giant Mitsubishi Heavy Industries Limited (MHI) has been the primary contractor for launch services and manufacturer of the rocket since the program was privatized in 2007.
This launch represents Japan’s first foray into the rapidly growing space-launch business, an industry that is quickly filling with a long list of experienced competitors and newcomers. Mitsubishi Heavy Industries is hopeful this launch will attract more foreign customers as the domestic launch business has been limited almost exclusively to government orders with no commercial orders having been placed. Although MHI claims to have received more than 100 inquiries from potential customers, only South Korea’s Aerospace Research Institute followed through with a contract.

Mitsubishi Heavy Industries has made impressive progress in reducing costs, but the nation’s high cost for labor and materials continues to plague the entire Japanese industrial base. To be successful Japan will have to overcome several well-entrenched competitors, experienced firms with established records of successful launches. French-based Arianespace and Russia’s Proton have an enviable lead on Japan and newcomers like America’s SpaceX and a maturing Indian space program will all challenge Japanese efforts to build a profitable customer-base.

Japan will almost certainly be burdened by cost considerations and questionable capacity, concerns that are not nearly as critical for the other firms in the industry. MHI’s success in managing cost issues has been significantly offset by the persistent strength of the Japanese yen in global markets. The competition has a decided edge in pricing, especially with SpaceX offering its Falcon rocket for an estimated $35 million when compared to $100 million for Japan’s H-IIA/202.

Even Japan’s domestic firms have regularly selected foreign firms to handle their satellite needs. Two of the most frequent Japanese users of launch services, SkyPerfect JSAT Holdings Incorporated and Broadcasting Satellite System Corporation, have shown a decided preference for Arianespace as a service provider. SkyPerfect has indicated a willingness to consider using the H-IIA/202 in the future, but cost will still be an important consideration that JAXA/MHI cannot ignore.

South Korea’s choice of the Japanese H-IIA/202 was a perfectly logical move. This is particularly true given widespread speculation among defense analysts that the Kompsat-3 may also serve as something of a spy satellite. Representatives from the Korean space agency have not entirely discounted this possibility saying only that the satellite “has a number of roles,” but also claiming that it was not “necessarily designed for national security purposes.”

Some industry experts believe that Japan is entering the satellite-launch business more for national prestige and not to turn a profit. However, JAXA director Keiji Tachikawa announced that the agency would begin work on an improved H-III rocket sometime next year with a projected first-launch date of 2022. MHI claims that the H-III will be a cost-competitive entrant in the launch business when it comes on line.

To further cut costs, MHI is looking to streamline production facilities by borrowing advanced computer technology from the aviation industry and automotive manufacturers. Another prospect for Japan to overcome its pricing problem is to offer developing nations a complete space program package that would combine launch services with ground-control operations.

A successful first launch of a foreign satellite is a major step forward for Japan, but the future of the program is fraught with uncertainty and burdened by a national economy that is far from healthy. The whole effort may be too little too late.