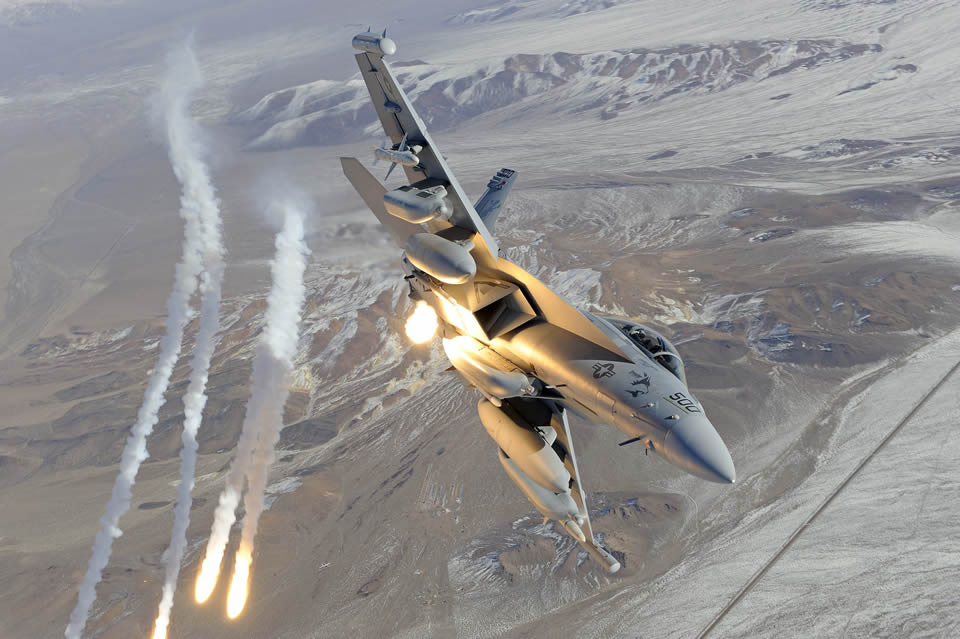 Now that Australia has decided to convert a total of twelve of the Royal Australian Air Force’s (RAAF) Boeing F/A-18F Block II Super Hornets to EA-18G Growler electronic warfare configuration, the RAAF aircrews assigned to fly the Growler can look forward to a long period of transition training before they’re qualified to manage the Growler’s unique idiosyncrasies.

The RAAF currently operates a fleet of twenty-four Super Hornets half of which were prewired for modification to the Growler configuration. The cost of the deal is estimated to be $1.57 billion. This agreement includes conversion kits, spare parts, training, and support equipment. The procurement was negotiated through the United States’ Foreign Military Sales (FMS) program.

The US Navy accepted delivery of its first operational EA-18G Growler for fleet service in 2008 and the US Department of Defense (DoD) authorized Full Rate Production (FRP) in late 2009. So far, Boeing has delivered 66 Growlers to the Navy. The Growlers experienced their first taste of combat in the skies over Libya between late-2010 and mid-2011.

As an Airborne Electronic Attack (AEA) aircraft, the EA-18G is capable of being operated from both aircraft carriers and land-based airfields. The aircraft was developed as a replacement for the US Navy’s aging fleet of EA-6B Prowlers. The EA-6B Prowlers first entered active service in 1971 and are quickly nearing the end of their operational lifecycle.

The Growler design is a specialized version of the veteran combat F/A-18F Super Hornet fighter attack aircraft. The primary missions envisioned for the Growlers are Electronic Attack (EA) and Suppression of Enemy Air Defenses (SEAD). With nine hardpoints capable of carrying a total of 8,050 kilograms of external fuel and/or ordnance, the Growlers can be armed to perform strike missions should dedicated strike aircraft be unavailable or when time is a critical consideration.

The EA-18G Growlers are slated to become the United States’ sole electronic warfare attack aircraft. The last remaining US Air Force EF-111 Ravens were retired in 1998 and the EA-6B Prowler airframe has reached its operational limits. Although the Prowlers are showing their age, they continue performing sterling service with the US Navy and the Marine Corps. Despite performance limitations, the EA-6Bs are still called upon to escort combat air strikes, engage in electronic jamming operations, and are used to interdict enemy Improvised Explosive Device (IED) attacks against American ground forces.

Other electronic warfare aircraft types are in service, such as the EC-130H, but they are much too slow to be employed in the tactical jamming role. The EA-18G Growler does overcome many of the weaknesses inherent in the EA-6B and other electronic warfare aircraft, but it brings some unique weaknesses of its own to the airborne warfare environment.

The Growler shares 90 percent commonality with the Super Hornet and has a similar flight performance giving it the ability to deliver escort jamming along with more traditional standoff jamming. Because of its flight characteristics, the Growler is expected to accompany F/A-18s throughout the duration of assigned attack missions.

The Super Hornet and the Growler have a shared airframe; both carry the Raytheon AN/APG-79 Active Electronically Scanned Array (AESA) radar and the AN/AYK-22 stores management system. Most of the Growler’s airborne electronic attack components are housed in the space reserved for the 20 millimeter gun mounted in the Super Hornets and on the wingtip rails.

The wingtip rails are designed to carry AN/ALQ-218 wideband receivers. The nine external hardpoints can accommodate additional weapons or jamming pods to include as many as five ALQ-99 high and low-band tactical jamming pods. A typical combat load would also include two AIM-120 AMRAAM (Advanced Medium-Range Air-to-Air Missile) or AGM-88 HARM (High-speed Anti-Radiation Missile) missiles. The Growler is also equipped with the INCAS Interference Cancellation system that makes it possible for Growler crews to retain voice communication while actively jamming enemy communications, a capability not available on the EA-6B Prowlers.

Despite the promise of superiority the Growler appears to bring to the airborne battlefield, some reliability and performance issues are still a significant concern. In April 2006, the US Government Accountability Office (GAO) released a report that raised concerns about the Growler’s electronic warfare systems. The GAO report said that the agency believed that these systems were not fully “mature” and this would likely result in long-term cost increases and production delays. A 2008 GAO report quoted the director of DoD’s Department of Operational Test and Evaluations (DOT&E) as citing concerns that the Growler’s two-person crew would be overworked and would experience difficulty performing as effectively as the four-man Prowler crews were able to perform.

A March 2010 GAO report also cited a difference of opinion between DOT&E and US Navy evaluators as to the operational performance and capabilities of the EA-18G. The Navy declared the Growler effective and suitable for operational use while the DOT&E considered the aircraft “to be operationally effective for most missions, but not all, due to the excessive time required to make reactive jamming assignments.” The difference of opinion centered on the unreliable performance of the ALQ-99 jamming pods and frequent failures of the system’s built-in self- test (BIT) feature.

The ALQ-99, as part of the aircraft’s electronic warfare suite, was also responsible for degrading the Growler’s AESA radar performance.

Although Navy testers identified only one deficiency in their evaluations of the Growler, the ALQ-99 failures, they did not consider the ALQ-99 problems to be critical deficiencies because operating guidelines at the time called for independent, vice integrated, operation of the AEA and AESA systems. DOT&E identified seven deficiencies in the aircraft and concluded that the ALQ-99 problems placed an excessive burden on the aircrews and negatively impacted their confidence in the aircraft’s AEA electronics. The report also determined that the addition of external jamming pods, weapons, and external fuel tanks reduced the aircraft’s speed to the point where it might be unable to keep pace with the strike aircraft it was designed to support.

DOT&E also expressed the view that a two-man crew could successfully handle the workload common to some missions, but missions involving intense radar and communications jamming would likely task the crew to the limit of their abilities increasing a strike mission’s vulnerability to enemy action.

Boeing and the Navy are continuing their work on development of the Next Generation Jammer (NGJ), a system that uses AESA technology to more-accurately focus jamming transmissions, to equip the EA-18Gs as a replacement for the failure-prone ALQ-99 jamming pods, but the NGJ is not expected to be available until 2018.

Good or bad, the EA-18G is the western world’s only AEA aircraft of the future as no alternative platform exists. For Australia, adding the Growlers to the RAAF’s fleet of Super Hornets is viewed as a necessary step in strengthening the nation’s airborne defense capability.  The question to be answered is, can the American and Australian flyers learn to overcome the challenges they will face in handling the EA-18Gs known deficiencies?  In modern aerial warfare combat comes fast and furious, far greater than anyone living has ever experienced. Will the aircrews be ready and can they do all that they must do to stay alive and return home successful?