The vessel completed a series of ten sea trials that lasted 12 months in August 2012. Launching and recovery of fighter aircraft has yet to begin – the sea trials sofar have focused on the vessel’s performance. Liaoning is designed to operate the J-15 carrier based strike fighters, a Chinese version of the Russian Su-33 operated by the Russian Naval Aviation.

The vessel has 10 floors below the main deck, with the island superstructure towering 9 layers above deck. The vessel is designed to support catapult, Ski Jump and vertical take-supporting fixed-wing aircraft and helicopters. Landing is supported on the diagonal deck, fitted with four arresting cables.

Liaoning is providing the China a useful ‘training platform’ to develop its carrier strategy. In the future, Beijing plans to deploy several carrier groups, as part of its growing blue-sea naval force. One of the homeports mentioned for such carrier strike force was Qingdao. “The formation of such a group is made up of the carrier itself, escort vessels, submarines and aircraft” Chinese Defense Ministry spokesman Yang Yujun confirmed. He said the main systems of the aircraft carrier and the aircraft it will carry were developed by China. “We have independent intellectual property rights and are pushing forward with relevant procedures as scheduled” Yujun said. He dismissed reports about a second aircraft carrier prepared for launching later this year in Shanghai. “Such reports are inaccurate” Yujun said. 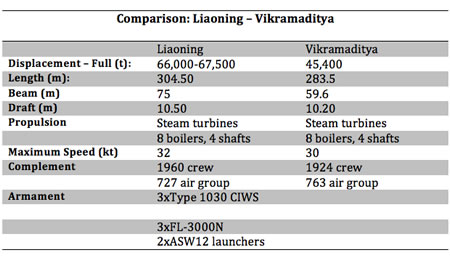 This article is part of three-part series including: