In the past 10 years force protection has been at the focus, as the military invested tens of billions of dollars buying anything that could enhance the survivability and protection of troops. However, since such devices are often required to counter specific and evolving threats that were uncommon or unfamiliar before, most of these acquisitions are managed as ‘urgent requirements’ and procured through accelerated acquisition by the Rapid Equipping Force (REF). While REF is mostly responsible for the adaptation, evaluation and fielding of existing equipment, the Joint IED Defeat Organization (JIEDDO) is responsible for combatting the No 1 threat to warfighters today – Improvised Explosive Devices (IED). Like REF, JIEDDO is responsible for the acquisition of equipment, but this organization also invests and motivate industry and research institutions to suggest and develop new countermeasures, and methods to detect, and fight IEDs and the networks that support them.

It also manages training and knowledge centers supporting deployed forces throughout the world, by collecting information on threats, and suggesting recommended tactics and countermeasures, in an effort to enable front line units to stay ahead of the threat.

Until recently, C-IED equipment focused on equipping specialized teams of combat engineers tasked with the job. A large acquisition program currently underway will prepare ordinary units to better deal with IEDs, using simple to use man portable unmanned ground vehicles (UGV). The Ultra-Light Recon Robot (ULRR) program is equipping combat units with robots that can defeat IEDs employing simple and tested methods. While initial orders have already been issued to some of the bidders, the competition is still open, and all the robots competing for this program are present at AUSA to promote their products. These include the SUGV from iRobot and DragonRunner from QinetiQ, MTGR from Roboteam and the miniature Throwbot from recon Robotics

Improving the warfighters’ situational awareness is another facet of force protection – by expanding the security and surveillance circles beyond the unit perimeter. Radars, ground and aerial observations, unmanned aerial vehicles and unattended sensors are all part of this growing capability. Yet, since fewer, and smaller deployed units are expected to do ‘more with less’, all these sensors must work together, supporting the common goal providing a common situational picture. They should trigger an alarm before the enemy can act, and minimize false alarms, thus reducing the possibility of collateral damage from unnecessary response and reduce the workload of the troops.

Among the new sensors currently being fielded or completing development are advanced radar designed to trigger automatic alarms and localize sources of artillery, mortar and rocket fire, and even small arms and RPGs. Such radars are available in large sizes, covering wide sectors, or tactical mobile or vehicle mounted radars, offering protection for battalions, companies and even smaller units. Utilizing similar technologies, other Ground Surveillance Radars are providing troops with standoff surveillance capability looking many miles into enemy area, others are designed to cover close-range, to maintaining a safe perimeter of few hundred meters protecting ambushes out in the open or forward operating bases and other facilities, located in urban terrain. 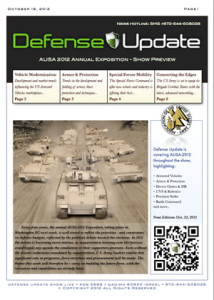