As the Tejas Light Combat Aircraft (LCA) has been in the making for much too long, but despite the delays, the aircraft that slowly moves toward the finish line is ‘born old’. If and when it is announced ‘fully mission capable’ by next year, Tejas will represent a mid-1990s generation platform, but will be ready to deploy with combat systems of the 21st century.

This has not come by choice – the Indian Government and research establishments insisted for decades that the LCA as other indigenous weapon systems should be 100 percent Indian designed and made. This attitude has stumbled the project for years, as Indian R&D centers were coping with knowledge gaps, technological issues or manufacturing capabilities. After three decades, as the aircraft is finally pacing toward the coveted (and much delayed) ‘full operational capability’ status, it is clear that many of its subsystems are not domestic, and many others may be built in India but not Indian designed.

Assuming the Astra missile currently developed for the aircraft not meet the full flight envelope performance goals, the IAF and Indian Naval Aviation are integrating the Derby and Python 5 missiles on the aircraft, along with Russian R73 that was slated for the aircraft from the beginning, to meet the required full-operational capabilities level for the fighter. These weapons will be needed primarily to meet the Indian Navy requirement for carrier air defense, as the LCA will begin to replace the Sea Harriers that currently carry those missions with these weapons.

The LCA will also carry the EL/M-2052 active electronically scanned array (AESA) radar developed by IAI Elta. Originally, the EL/M-2032 was selected but the new 2052 now available with a more compact antenna is best designed to fit the nose cones of LCA and Jaguar, offering enhanced capabilities for both fighters. This agile radar, along with the DASH-3 helmet mounted display sight from Elbit Systems will enable a Tejas pilot to acquire targets at all combat ranges and engage them in full sphere, shooting the missiles by merely looking at the target, without having to maneuver the LCA toward the target, thus making the Tejas much more potent than the sum of its aerodynamic capabilities offer. In fact, such smart combat systems could provide the LCAs just that amount of survivability it needs to avoid trouble, safely carry out its mission and even win a dogfight if the situation ‘gets ugly’.

The aircraft will also be carrying the Litening targeting pod, enabling the LCA to deploy precision guided weapons of various types – from laser guided, to GPS or EO guided weapons.

We recommend Livefist for more photos from the recent test campaign 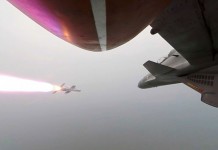