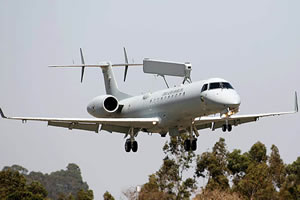 The Brazilian Air Force is upgrading its E-99 Airborne Early Warning & Control (AEW&C) aircraft. Saab Defence and security company announced today it has received an order from the Brazilian company Embraer Defense and Security, for the upgrade of the Erieye AEW&C Mission System. The total order amounts to about US$60 million (380 MSEK.)

The contract part of the modernization programme for the Embraer 145 AEW&C, named E-99 (formerly designated R-99A) in the Brazilian Air Force, slated for delivered from 2014 until 2017. The first system for Brazil on the Embraer 145 became operational 2002. Erieye is also operational on ERJ-145 in Mexico and Greece. India has also selected a specially modified configuration of the ERJ-145 platform for its indigenous AEW&C program.

The procurement of three AEW&C aircraft was part of the SIVAM (Sistema de Vigilância da Amazônia) program, deploying AEW&C and remote sensing aircraft over the Amazon region, in an effort to establish law enforcement, environmental protection and fight drug trafficking in the area.