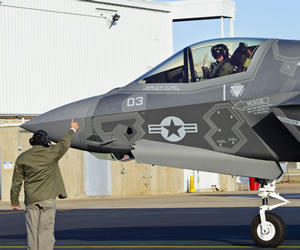 Japan has adhered to a long-standing ban on the export of weapons in an effort to honor a self-imposed rule not to contribute to the perpetuation of international conflicts. Exempting the F-35 from provisions of the ban is predicated on the understanding that the United States, as the primary manufacturer of the aircraft, will accept responsibility for enforcing strict controls over access and use of the components manufactured in Japan.
The Japanese export ban was initiated in 1967 by the prime minister of the time, Eisaku Sato, outlined in an order embracing a guideline of “three principles” to restrict weapon’s exports to communist nations, all nations subject to United Nations’ armament embargoes, and those countries engaged in international conflict. This prohibition was strengthened in 1976 to become an almost absolute ban.

Many critics of the ban have long argued that the restrictive nature of this edict has prevented Japanese defense contractors from keeping pace with vital technological advances, has deprived them of lucrative business opportunities, and has increased the overall cost of weapon’s procurement.

At times, the ban has been eased to satisfy political realities. In 1983, the ban was modified to allow for the sharing of weapon’s technology with the United States and again in 2004 to permit the two allies to combine their efforts in developing a practical missile defense system. In 2011, the ban was again modified to allow Japan to participate in joint projects with foreign nations to develop and manufacture weaponry supposedly aimed at strengthening international peace efforts.

In a prepared statement released 1 March, Chief Cabinet Secretary Yoshihide Suga announced the government’s decision to relax the ban while continuing to adhere to the nation’s pacifist principles. Secretary Suga stated that it was imperative for Japan to develop a viable framework to upgrade the nation’s defense capabilities, production of defense-related materials, and gain access to associated technology. During a press conference, Secretary Suga indicated that relaxation of the ban would enhance Japan’s national security and was in keeping with the nation’s security agreements with the United States.

It is expected that Japan’s Mitsubishi Heavy Industries Limited, IHI Corporation, and Mitsubishi Electric Corporation will all have a hand in the production and maintenance of F-35 components. These business entities are expected to contribute to the manufacture of fuselage parts, radar systems, and engine components.

In addition to authorizing the manufacture and export of F-35 parts, the government also agreed to allow the Japanese Self-Defense Force (JSDF) to use non-warfighting support equipment – construction equipment, protective vests, and the like – to assist foreign nations in humanitarian efforts.

Japan’s decision to relax the ban comes at a time when the nation is embroiled in territorial disputes with China, South Korea, and Taiwan. The dispute with China over the sovereignty of a collection of rocky outcroppings in the East China Sea has escalated in recent months to the point where both nations have launched fighter aircraft and armed naval vessels to intercept intruders entering the disputed region. China’s apparent advances in military technology and its warfighting capabilities in the past year have also heightened Japan’s national security concerns.

In 2011, Japan signed an agreement with the United States to procure an initial shipment of four F-35s, with a follow-on order for an additional 42 aircraft to replace the Japanese Air Self-Defense (JASDF) fleet of aging fighters. The first aircraft are tentatively scheduled to begin delivery sometime in 2016 or early 2017.

Despite the bad press and technical problems that have plagued the Lightning II since its inception, the Japanese Ministry of Defense insists that the aircraft continues to be Japan’s choice for the future of its aerial combat fleet.

The F-35 is being developed and manufactured by an international consortium under the leadership of the Lockheed Martin Corporation. This consortium now consists of ten nations each contributing parts, technology, maintenance, and expertise to the project. In his statement, Secretary Suga insisted that it was necessary for Japan to become an active member of the consortium to ensure the JASDF had full access to all resources required to optimize the operational capabilities of the aircraft.

The system presently in use to develop the F-35 into an operational fifth-generation stealth fighter able to outperform any and all potential adversaries is called the Autonomic Logistics Global Sustainment (ALGS) program. The basic premise of this arrangement is to reduce costs and enable participating nations to acquire parts and perform maintenance with a minimum of delay.

Opposition critics have voiced their concern that Japanese-produced parts will find their way into F-35s operated by Israel, a member of the ten-nation ALGS. This, the critics say, would violate Japan’s claims of pacifism in light of Israel’s precarious situation that has often escalated into armed conflict in the past.

When presented with this inconvenient reality, Secretary Suga claimed that should any F-35s equipped with Japanese-made components actually become engaged with hostile forces, Japan could always discontinue producing parts for the ALGS. This stance, of course, would be virtually impossible to live up to since Japan will be wholly dependent on the ALGS to keep its own F-35s flying.