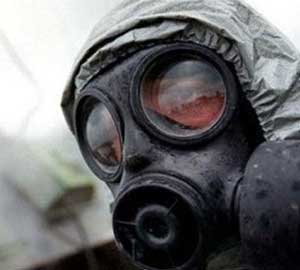 Testimony from victims of the conflict in Syria suggests rebels have used the nerve agent, sarin, a leading member of a UN commission of inquiry has said. Carla Del Ponte told Swiss TV that there were “strong, concrete suspicions but not yet incontrovertible proof”. The BBC reports.

Ms Del Ponte did not rule out the possibility that government forces might also have used chemical weapons. Later, the commission stressed that it had “not reached conclusive findings” as to their use by any parties. “As a result, the commission is not in a position to further comment on the allegations at this time,” a statement added. According to the BBC the statement was terse and shows that the UN was taken by surprise at Ms Del Ponte’s remarks.

“This is not the first time rebel forces in Syria have come under suspicion for using chemical weapons.” BBC Diplomatic correspondent, Bridget Kendall commented, “The Syrian government has accused them, and some independent commentators have speculated some groups could conceivably have got hold of stocks when storming government facilities.” Kendall added that the recent allegations coming from a senior UN official is a different matter. “Carla del Ponte is a former war crimes prosecutor and serves on a UN commission looking into human rights abuses in Syria. So any comments from her carry weight.”

The responsibility on chemical attacks attributed to the Syrian regime was one of the main causes for the shift in the west toward backing the Syrian rebels, with growing openness to actively supporting the rebels with arms and training. The news about the use of the use of such weapons will likely cool off such initiatives.