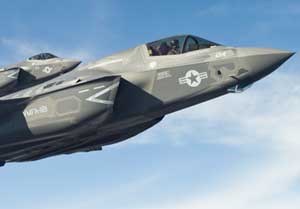 The US Marine Corps is expected to be the first service to declare the F-35 Joint Stike Fighter (JSF) operational. If all goes according to plan, the corps could have up to 16 of the stealth fighters operational by mid 2015. These fighters will be ready to conduct Close Air Support (CAS) missions, offensive and defensive counter air, air Interdiction, assault support escort, and armed reconnaissance in concert with Marine Air Ground Task Force resources and capabilities. The USMC also requires the jet’s Autonomic Logistic Information System V2 software to declare IOC. Like the USAF, the Marines require Block 3F for their future needs.

The training unit at Eglin is expected to receive the first Block 2A aircraft, equipped with software upgrade and increased capability. For the IOC, the first Marine squadron will operate the jets with the next version – Block 2B. “If the F-35 IMS Version 7 executes according to plan, Marine Corps F-35B IOC criteria could be met between July 2015 (Objective) and December 2015 (Threshold),” the Marine Corps confirmed in a recent report submitted to Congress by the three services scheduled to operate the Lightning II fighter. The Marines will declare IOC when the first squadron of between 10 and 16 aircraft is trained and ready.

The corps’ F-35B will initially operate from land bases, as the planned operation from Landing Helicopter Dock (LHD) will require significant modifications to accomodate the STOVL jet fighters. According US Navy Admiral Jonathan Greenert, chief of naval operations, certain modifications for the Wasp-class LHDs ship have already been designed. According to Aviation Week, The modifications are intended to offset the stresses associated with JSF exhaust during vertical landing. Extra shielding will be required, protecting vulnerable elements on the deck, that cold be vulnerable to the heat generated by the jet exhaust. The Navy has not disclosed how long it will take to implement the modifications across the LHD/LHA fleet.

The F-35 program schedule calls for the first Marine F-35B unit, VMFA-121, to be ready for a “contingency deployment” by late 2015. However, there is no firm date for a second squadron. VMFA-121 is the first operational fleet squadron anywhere in the world for the F-35 and comprised of flyers and maintainers trained at Eglin. While the squadron is expected to become ‘combat ready’ in two years, its actual combat capability is not clear, Aviation Week wrote. Out of the weapons cleared in the Block2B/3I software standard, only the laser-guided bomb is considered useful for close air support (CAS), which is the primary mission of embarked AV-8Bs. None of the 2B weapons are suitable for use against quickly moving targets or for a situation in which the risk of collateral damage is high. (For these missions the US Navy employs weapons like Laser JDAM and Hellfire, and will ultimately employ the SDB-II as it becomes available).

Another concern about the F-35B CAS capability is lacks the Rover (remote video receiver) technology. Traditionally, U.S. stealth aircraft lacked interface to non stealth assets, and Rover, considered as the minimum essential interface for CAS, will have to be included if the stealthy F-35B would ever be considered for this basic air support application. To implement such capability in the short time left for IOC the Marines could be carrying Rover in an extenal pylon or pod, until an internal solution is available for teir F-35B. The US Navy however is holding firm on requiring the full Block 3F configuration for its F-35C IOC date. “If the F-35 IMS Version 7 executes according to plan, Navy F-35C IOC criteria could be met between August 2018 (Objective) and February 2019 (Threshold),” the report reads.

The aircraft will fly with the current software configuration known as Block 2B configuration in 2015. “If the F-35 IMS Version 7 executes according to plan, Marine Corps F-35B IOC criteria could be met between July 2015 (Objective) and December 2015 (Threshold),” the report states.

The Marines will declare IOC when the first squadron of between 10 and 16 aircraft is trained and ready “to conduct CAS, offensive and defensive counter air, air Interdiction, assault support escort, and armed reconnaissance in concert with Marine Air Ground Task Force resources and capabilities”. The USMC also requires the jet’s Autonomic Logistic Information System V2 software to declare IOC. Like the USAF, the Marines require Block 3F for their future needs, the report says.

Unlike to the Marines, the US Air Force, the largest customer for the tri-service jet, is willing to wait few months longer to get the next software version known as Block 3i, declaring its first squadron operational in the second half of 2016. The first squadron will fly 12-24 F-35As equipped and train to conduct basic close air support (CAS), interdiction, and limited suppression and destruction of enemy air defense (SEAD/DEAD) operations in a contested environment.

This new schedule reflects a departure from previous plans to field the JSF a year later, in 2017, with the final Block 3F configuration. The current IOC will suffice with either the earlier Block 2B software load or with Block 3i, currently being tested. The new schedule emphasize the Air Forces determination to improve its capabilities to operate in contested and denied airspace even if such capabilities are partial.

The report said the Air Force will need to field full Block 3F capability, facilitating enhanced lethality and survivability, but noted “the IOC will provide sufficient combat capability for the threat postulated in 2016,”

The US Navy however is not compromizing on Block 3F and is willing to wait more than three years, until mid 2019, after the Marines field their own STOVL F-35Bs, untill having the first F-35C unit operatioonal with at least 10 aircraft on board one of its aircraft carriers. these aircraft will be configured with Block 3F. The USN says that it must have the Block 3F configuration to deal with threats in the post-2018 environment.