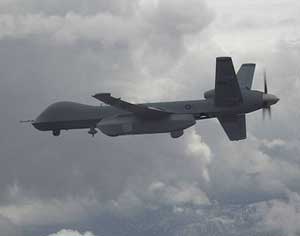 France has decided to buy two MQ-9 Reaper medium-altitude long endurance (MALE) drones from the USA, to extend the strategic reconnaissance capability of the French Air Force after the current Harfang drones end their planned mission in 2014. The two General Atomics (GA-ASI) MQ-9 Reapers that will be delivered by 2013 year-end. The two drones are not likely to be used in armed recce missions as they do  with the US Air Force. Defense-Update reports.

Given the short delivery schedule, it is likely the two Reapers will not be new but taken from the US Air Force inventory. According to the French Defense Minister Jean-Yves Le Drian the French Air Force desperately need the new drones to address the immediate situation in the Sahel region.

The Harfang was fielded with the French Air Force under the SDIM program in June 2008. France ordered three planes and two ground control stations which became operational with the Drone Experimentation Squadron 1/330 Adour, in Cognac, in June 2008. From the beginning the program was regarded as an interim capability, and proposals for the full capability plan were submitted by EADS Since 2007. Despite their ‘interim’ capability, the French Harfangs were supporting all contingencies the French forces were involved in, including Afghanistan, Libya and Mali.

Through the years the Ministry of Defense evaluated only two options – the Israeli Heron TP and US made MQ-9 Reaper. IAI, the developer and manufacturer of the Heron and Heron TP has teamed with Dassault Aviation and EADS to form industry teams to support the selection of its drones, but has not succeeded in winning the French Air Force support for its system.

The procurement of the two Reapers is also considered an interim phase, until France is capable of establishing its own drones, considered as the centerpiece of future intelligence and combat operations. Two parralel programs are currently underway in France – the collaborative development of a jet-powered Unmanned Combat Air Vehicle (UCAV) known as NeuroN, expected to replace some manned aircraft by 2030. Another collaborative development of a UAS, with the British industry. Dassault is also cooperating with Israel Aerospace Industries, on the development of a future MALE platform addressing the French requirements. However, it is not clear whether this alliance will hold after failing to win the interim MALE program. France is currently interested in MALE drones designed for strategic reconnaissance, attack missions are currently not a priority for these assets.

IAI is also coopreating with Rheinmetall’s Unmanned Aerial Systems, a joint entity set by EADS and Rheinmetall, pursuing a similar program in Germany. Defense Minister Thomas de Maiziere said Berlin is set to decide on the procurement of 16 drones, five to be operational by 2016.