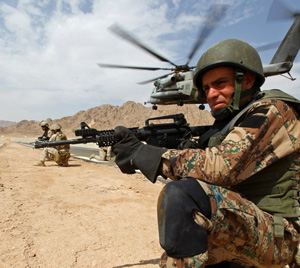 U.S. Defense Secretary Chuck Hagel has approved a request from the Kingdom of Jordan to keep a detachment of F-16s and Patriot Missiles in Jordan following the conclusion of Exercise ‘Eager Lion’ taking place in the Kingdom this month. Eager Lion is held annually training a coalition of air forces in irregular warfare. This year the exercise more than 8,000 service members from about 19 countries participated in the exercise, running from June 9 to 20. “All other U.S. personnel assigned to Jordan for Eager Lion will depart at the conclusion of the exercise. The United States enjoys a longstanding partnership with Jordan and is committed to its defense,” George Little, Pentagon spokesperson noted.

The decision to position Patriot batteries in Jordan, south of the Syrian border, has been particularly controversial for Russia, Syria’s main ally. Russia is worried the missiles could be used by the United States and its allies to impose a “no-fly” zone over Syria, a first direct Western military intervention in the conflict. The missiles could be used to protect Jordan from a retaliatory missile attack from Syria, would the U.S. decide to assist Rebels from Jordan, or protect Syrian rebel strongholds in the region of Dara’a, in southern Syria.

Russian Foreign Minister Sergei Lavrov said on Saturday any attempt to enforce a no-fly zone over Syria using F-16s and Patriot missiles from Jordan would violate international law. Jordan and Syria’s other neighbors are increasingly nervous the Syrian civil war will spill over its borders.

In April the U.S. Army dispatched about 200 personnel Jordan, to bolster border security, particularly aimed to mitigate spillover of violence and Syrian chemical weapons accross the Jordanian border. Last week the Jordanians warned the Syrian ambassador after he threatened that Syrian missiles could be used against the U.S. Patriot missile batteries positioned in the kingdom. Similar missile systems were positioned several months ago by NATO, protecting the Turkish southern border against Syrian missile attacks.

Meanwhile, following the U.S. administration’s decision to support the rebels, weapons are being the other way around – transferred into Syria. Jordan, with its stable regime and unquestioned loyalty would offer a more likely route of supply, over the Iraqi option, which is already supporting the extremist rebel factions In Syria as well as the Syrian military itself. The U.S. supplied weapons are likely to include rocket-propelled grenades and mortars, weapons the rebels have been using for months, seized from Syrian military stocks.