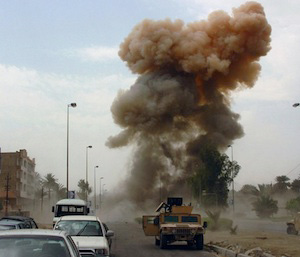 In October 2012 The US Defense Advanced Research Projects Agency (DARPA) published a call for technology developers to come up with innovative ideas for explosive detection technologies capable of detecting and identifying explosives from standoff distance. The ‘Methods for Explosive Detection at Standoff’ or MEDS program is seeking to rapidly develop and demonstrate non-contact methods to detect explosives packaged in opaque cases, or embedded with high water content (e.g., mud, meat, animal carcasses). Defense-Update reports.

Improvised Explosive Devices have always posed a major threat to military forces, but in the past two decades IEDs have gone through continuous evolution, with coalition forces countering such threats with numerous countermeasures and avoidance tactics (C-IEDs). Such techniques are manifesting ever increasing levels of sophistication. These range from indirect methods to detect packaging, wiring, or fusing to direct detection and neutralization of IEDs.

Back in february this year DARPA awarded the first contract under the MEDS initiative to Quasar Federal Systems. QFS has developed and employed an integrated electric and magnetic field sensing systems, providing ultra low noise, low frequency electromagnetic sensing systems and applications in mapping surface and subsurface objects. The $1.17 million contract from DARPA will evaluate the use of a combined MRI and Quadrupole Resonance (QR) modality for standoff explosives detection. Other contracts were awarded to BAE Systems, the University of Arizona, Northeastern University of Massachusetts and the Stanford University of California.

Last week DARPA has awarded the biggest contract under the MEDS program to NIITEK, Inc. This $2.13 million contract will span over 18-months. This thrust aims to develop novel sensors capable of detecting explosives by tracing their unique signatures from a distance. According to Juan Navarro, President of Chemring Sensor and Electronics, NIITEK parent company, the current development is defined as a ‘proof-of-principle’ experimentation, but NIITEK and its academic and small business partners are confident that, with proper development, the technology can be transitioned into a system that could prove useful to both the Department of Defense as well as domestic security and law enforcement.

Each of these technologies has their strengths and limitations in terms of sensitivity, speed, specificity, ability to penetrate various media, and health effects. Applicability of these methods can be highly dependent on packaging and operational conditions. In addition, the use of ionizing radiation, other than possible employment of backscatter technology must be excluded because of health concerns to military personnel and civilians in proximity to the area of concern.

While trace detection offers reliable performance in uncontaminated environment, such methods are vulnerable to relatively simple masking techniques, by hiding the explosive in opaque media with high water content – such as animal Caracas or water containers. This will preclude the use of trace detection methods and bulk methods where significant penetration into the medium is not possible.

New technologies that could be implemented for such applications including Ultra wide band (UWB) imaging, capable of penetrating deeper into a structure without the negative effect of ionizing radiation, could be derived from medical imaging technologies developed for oncological research. Other sensors could implement  thermoacoustic imaging, and novel nonlinear acoustic methods also developed for cancer detection open the opportunity to develop and apply non-contact acoustic methods to this application. Unlike the medical instruments that can penetrate 10-16 cm into a living tissue, DARPA’s MEDS research is seeking a contactless penetration of such target from standoff distance.

Apart from these researches, mixed modality mechanisms could also be implemented, by combining electromagnetic indicators and acoustic vibration, indicating sub-surface anomaly. According to models and simulations such detection techniques could detect millilitre scale objects at a depth of one centimeter inside an opaque container. Enhancing these techniques with Doppler effect processing could further increase detection depth.