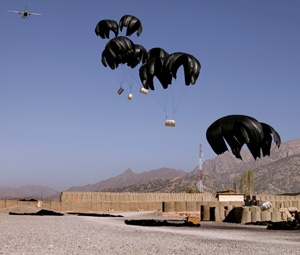 Military vehicles don’t run without fuel—and warfighters don’t run without water. As little as a six to eight percent water deficit can be debilitating. As a result, military logistics plans must take into account the approximately three gallons of daily drinking water that each warfighter requires. However, the logistics burden of supplying water to deployed troops is comparable to that of fuel and the economic cost is high. Even more important is the cost in lives; former Marine Corps commandant Gen. James Conway said in 2010, “We take 10 to 15 percent of casualties among Marines involved in the delivery of fuel and water.”

The Department of Defense (DoD) currently relies on a number of water desalination systems to produce clean water from local sources. These systems help keep supply convoys off the road and allow troops to conduct their missions far from the infrastructure of a military base. However, all of these systems have size, weight and power (SWaP) constraints that affect their suitability for some missions.

The Lightweight Water Purifier (LWP) is an example of one highly capable desalination system fielded by the Army, able to produce approximately 75 gallons of potable water per hour (gph) from seawater. This capacity, however, comes at a cost in energy, weight and size. A three-kilowatt generator supplies energy, and the entire 2,000-pound LWP system must be transported on the back of a HMMWV.

To facilitate water supply at much smaller physical and energetic footprint, DARPA initiated the Materials with Novel Transport Properties (MANTRA) program to improve water desalination technologies and reduce their SWaP requirements. With funding from the MANTRA program, Teledyne Scientific Company, based in Thousand Oaks, Calif., developed an advanced capability prototype desalination system. Government testing by the Navy and Army found this prototype is capable of producing 90 gph of potable water from seawater, but weighs only 400 pounds. The Teledyne system performance was comparable to an LWP operating under similar conditions, and consumed approximately half the power.

Teledyne’s prototype system uses a new antifouling coating applied to the ultrafiltration (UF) membranes. This is an important step as effective separation of particles from the seawater prevents the downstream reverse osmosis membranes from clogging. Compared to uncoated membranes, the coating enables the UF membranes to operate seven times longer without cleaning, filter seawater at a higher throughput and consume less power. Engineers from the Navy believe this coating can be applied to various types of commercial-off-the-shelf membranes, thus improving currently deployed systems.

“From the beginning of the program, we worked with potential Navy and Army transition partners,” said DARPA program manager Barry Pallotta. “They agreed that even a 10 to 20 percent reduction in SWaP for a water desalination system would be of enormous value. MANTRA clearly exceeded that goal, and now the program is complete. Small, efficient water purification technology translates into greater expeditionary range and reduced exposure for military personnel.”