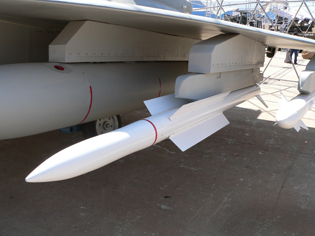 India’s first air-to-air Astra missile is finally back on track now after an excruciatingly long delay due to technical glitches. The beyond visual range (BVR) missile, with an eventual strike range of over 100km, will be fired for the first time from a Sukhoi-30MKI fighter this year. The Times of India reports.

Astra will have a Mark-I version with a 44-km range, which will be followed by the over 100km Mark-II version. “Astra will be a state-of-the-art missile that will first be fitted on Sukhoi-30MKIs and then Tejas Light Combat Aircraft, followed by others. We are pretty confident it will happen soon,” said DRDO chief Avinash Chander candidly. “The missile was repeatedly failing since the aerodynamically controlled interactions were very severe.” Chander admitted. “Finally, we changed the entire missile configuration. It has now undergone three successful ground trials. It then underwent captive flight trials in a Sukhoi-30MKI this April. We are over the hump now. We hope to actually fire it from a Sukhoi-30MKI by year-end,” said Chander.

With these “developmental flight trials” slated to soon kick off, which will involve a battery of tests covering the entire flight envelope, the aim is to make Astra ready for induction by mid-2015 “if there are no further surprises”, added the DRDO chief.