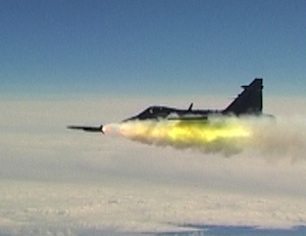 A Gripen test aircraft has completed a recent firing test of the MBDA Meteor Beyond Visual Range Air-to-Air Missile (BVRAAM) missile. The test was performed in cooperation with the Swedish Defence Materiel Administration (FMV) and the Saab Company. This was the first test firing of a production version of the Meteor radar-controlled air-to-air missile, which has been developed for Gripen, Eurofighter and Rafale.

The test occurred at the end of June, with two Meteor missiles fired from the Gripen at a remote-controlled target. The test firing demonstrated separation from the aircraft and the link function between the aircraft and missile, as well as the missile’s ability to lock in on the target. The target was engaged, however the missile was destroyed just before impact, in order to save the target. The test firing was also used to verify the command support that has been developed for the pilot.
Meteor uses a throttleable ducted rocket maintaining a cruising speed over Mach 4 and engagement range beyond 60 nm (100km).

Meteor is one of the first ‘network-enabled’ air/air missiles, equipped with a datalink that allows the launch aircraft to provide mid-course target updates or retargeting if required, including the transfer of data from off-board third-parties (such as a wingman or AWACS). Two versions of datalinks are developed for the Meteor – a one-way datalink supporting the rafale. A two-way datalink supporting the Typhoon and Gripen will be able to midcourse data to the missile and transmit missile information back to the launching platform, including functional and kinematic status, information on multiple targets, and notification of target acquisition by the seeker.

“Testing has been completed as planned and we’ve now taken yet another important step in work with integration and development of Gripen C/D,” says Michael Östergren, FMV’s project manager for the Meteor. “I’m impressed with the results that we’ve jointly accomplished and it instills considerable confidence in continued work with integrating the Meteor on Gripen.”

The Meteor is a BVRAAM (Beyond Visual Range Air-to-Air Missile) developed to enable engagement of airborne targets at long distances. The missile is the result of a European collaborative project involving Sweden, France, Italy, Spain, Germany and Great Britain. Great Britain has responsibility for contracts and work is led by UK’s defence procurement and support organisation – Defence Equipment and Support (DE&S).

“Once again it’s clear that Gripen is the leading combat fighter system with great opportunities for fast and cost-efficient continuous integration of new capabilities, such as weapons and sensors, thanks to our efficient way of working and Gripen’s innovative design. Gripen with the Saab PS05 radar and the Meteor missile represent the absolute best in the world when in comes to air defense,” says Lennart Sindahl, Head of Saab’s business area Aeronautics.

The test team included representatives from Saab, FMV and British MBDA. During the autumn, additional tests will be conducted so that delivery of the new capabilities can be made during 2014.