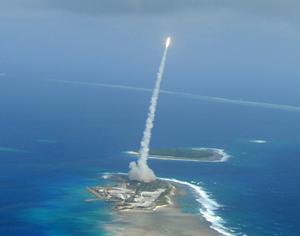 Over the Pacific Ocean today the United States missed a long-range ballistic missile in an operationally realistic test with its first generation Ground-Based Interceptor (GBI) that is currently deployed to defend the United States against a target missile flown out of Kwajalein Atoll in the western Pacific.

The Ground-based Midcourse Defense (GMD) element of the U.S Ballistic Missile Defense System failed yesterday as a three-stage Ground-Based Interceptor (GBI) interceptor missile was fired from Vandenberg AFB in California failed to intercept a long-range ballistic missile target launched from the U.S. Army’s Reagan Test Site on Kwajalein Atoll, Republic of the Marshall Islands. During the test, a target missile was fired at 11:30 a.m. PDT; the interceptor was launched Five minutes later. “Program officials will conduct an extensive review to determine the cause or causes of any anomalies which may have prevented a successful intercept.” the Missile Defense Agency announced.

“Preliminary findings into last week’s missed intercept test by the first generation Ground-Based Interceptor (GBI), leads into speculation of a failure to separate on the final stage of the GBI rather than a failure of the Kill Vehicle itself or system, to detect, track, and discriminate the incoming ballistic missile reentry warhead launched from Kwajalein Atoll.” Riki Ellison, Chairman of the Missile Defense Advocacy Alliance commented July 10th. “Initial indications show the fundamental elements of the ballistic missile defense system to detect, track, discriminate, and target worked from the multiple sensors in space, land, and sea to the communication of that collective data processed and transferred by our missile defense war fighters into the correct firing solution onto the GBI that was targeted and launched correctly. ”

This failure to separate has not been seen in previous tests of this GBI which could lead to an anticipated anomaly of one missile as the cause of its failure. Confidence and reliability of the system would vary greatly from an anomaly of one to a systematic issue with all of the GBIs. In either case, annual intercept testing of this system would have dealt with this issue of separation and could have resolved it as early as four years ago as well as other problems that might have occurred through regular use of these interceptors. Regular and consistent testing of our GBIs, as our nation does with our offensive missiles, will greatly increase our reliability and confidence to our GBIs as we have with our ICBMs.

“As a result, [of this failure] there is reduced confidence and reliability in regards to GBIs capability to defend all of the United States of America against the current and future North Korean long-range nuclear ballistic missiles as well as the future first generation Iranian long-range ballistic missiles.”

“This reduced confidence is reflective of the current testing record of this GBI first generation interceptor class deployed today in Alaska and California. That testing record is at eight intercepts out of 14 intercept attempts. The last successful intercept of this system was December 15, 2008. A product of this test will most likely be an increased shot doctrine and a higher number of these GBIs will most likely be used against a single incoming ballistic threat rather than the reduced the shot doctrine had the test been successful and brought more confidence, efficiency and reliability in interception. The fact of hitting 8 intercepts by this GBI first generation gives baseline confidence but comes at a heavy price using a lot of our limited 30 GBI inventory.” Ellison warned.

“As the technical data unfolds over time and analysis of the roots to the cause of this failure, the underlying factors is the lack of testing on an annual basis to the GMD system and acceptance of high adversity to risk by the Department of Defense to not test these GBIs regularly because of the chance of failure. This has to be remedied so that we may learn from failures and quickly adjust to fix, modernize and launch again until the corrections are completed of the existing issues. We, as a nation, with this critical mission to defend our population cannot afford to wait every four years to test this system. This system needs to be tested at least two times a year for intercepts.

We must have the fortitude to fix the issues that caused the failures quickly, soundly and as soon as possible. This system is all our nation has today to stop and intercept long-range nuclear missiles. We have to have it.” 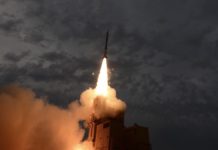