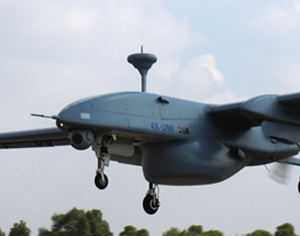 Displaying a wide range of systems, from 12 ton autonomous boats, and 16 meter wingspan Heron-I class drones shown in flight, to tethered hovercrafts and miniature man-portable systems weighing only few kilograms performing a live mission for the first time in public, AUS&R 2013 sets the stage for the leading International Event of Unmanned Systems Technology originating in Israel.

The AUS&R 2013 convention has reached a significant milestone today, with eight of the displaying companies participating in the Preliminary Display Review (PDR), confirming the demonstration of 10 different platforms in the event’s live display. (Register now to attend AUS&R 2013)

According to the PDR, the dynamic demonstration will span over several segments throughout the day. The program will offer opportunities for different systems to be demonstrated in realistic scenarios. This unprecedented display, here in Israel, provides a unique opportunity for top officials from the international defense forces, HLS and first responder community, to witness firsthand how unmanned systems can be employed in a range of practical applications, from terrain dominance and surveillance, counter-terror, security and safety, to emergency response and firefighting – all will be demonstrated here at the AUS&R live display.

The largest Unmanned Aerial Systems (UAS) approved for participation so far, is the Heron I Medium Altitude, Long Endurance (MALE) multi-mission drone from IAI, carrying various electronic payloads such as radar and EO systems. The Heron I weighs over one ton, and its wingspan measures 16.60 meters.

The Orbiter 3 Small UAS from Aeronautics, will represent the ‘Small UAS’ range. It will be the first public flight demonstration of this type. The Orbiter 3 will demonstrate reconnaissance missions carrying a multi-sensor EO payload.

Another system to be displayed in live operation for the first time, is the Hovermast tethered platform from SkySapience, deployed from a vehicular platform. The Spider Micro-UAS developed by Innocon is also expected to make its first live public demonstration debut here.

G-NIUS and Amstaff On Guard have both confirmed the participation of Unmanned Ground Vehicles. G-NIUS will showcase the Guardium II unmanned patrol system and TAGS robotic combat platform demonstrator, while the Amstaff 6 and Amstaff 8 will be shown configured for security and first response applications.

More drones, UGVs and USVs of Israeli and International origin are in the approval process for the live display. Additionally, many more systems will be shown on the static display.

The First International Autonomous Unmanned Systems & Robotics (AUSR 2013) convention will take place in Rishon LeZion, south of Tel Aviv on November 26, 2013. The event will include a professional conference, exhibition and live demonstration. Hundreds of delegates have already confirmed their participation at the event. More details are available on the event page: AUSREXPO.COM