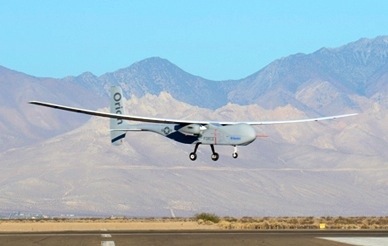 Aurora Flight Sciences Orion UAS has made its first flight last month, on August 24, 2013 the Orion took off from an unnamed airfield in the western test range, on a flight that lasted three hours and thirty-one minutes. The drone reached an altitude of 8,000 feet above mean sea level on that flight.

This mission was the first step towards demonstrating a 120-hr. flight at 20,000 ft. carrying a 1,000-lb. multi-sensor payload. Such extended endurance would allow the new drone to provide continuous surveillance carrying a Predator-class payload with fewer takeoffs and landings than current medium-altitude, long-endurance UAS flying 24-hr. missions, significantly reducing the manpower burden and operating cost.

Powered by a pair of fuel-efficient Austro Engine AE300 turbo-diesels, the aircraft flew for 3.5 hr., reaching an altitude of 8,000 ft. and airspeed of around 60 kt., says Tom Clancy, vice president of Aurora’s UAS business sector. Within the Defense Department, ownership of the Orion program has changed hands several times.

Aurora declined to identify its current customer, but Aviation Week understands it is the U.S. Air Force’s Big Safari program office, which manages the acquisition and modification of special-mission platforms. Using the composite wing and tail of the original HALL design, the Orion was rolled out at Aurora’s Golden Triangle, Miss., plant in November 2010, when it was expected to fly in August 2011.

In spite of program delays the basic objectives set at the beginning remain: a 120 hr. autonomous UAS carrying 1,000 lb. to 20,000 ft. There was no mission system on board for the Orion’s first flight, but there will be a payload on the aircraft for the 120 hr. demonstration flight, expected to be conducted by mid-2014. A number of different multi-intelligence payloads are potentially part of the program.