The Country’s Hyunmu-3C cruise missile, which has a range of 1,000-1,500 km, could hit most strategic targets in China and Japan as well as in North Korea. Officials claim it is as accurate as the U.S.’ Tomahawk cruise missile, i.e. within a three meter radius. Hyunmu-2, a ballistic missile, has a shorter range than that of North Korea’s ballistic missiles with 300 km but can hit targets within about 10 m. Mobile launch vehicles for the missiles were also unveiled in the parade.

Also on show were the RAFAEL Spike-NLOS missiles and a remote-controlled quadruped robotic vehicle.

The Spike NLOS missiles were bought from Israel after the North shelled Yeonpyeong Island in November 2010 and are supposedly capable of destroying North Korean artillery kept in underground bunkers. They were deployed warfare-ready on the five north-westernmost islands in May.

Spike NLOS can carry the entire family of warheads designed for the Spike, including the shaped-charge anti-tank, and penetration blast fragmentation (PBR), enabling the missile to effectively strike targets beyond line of sight.

The missile integrates a dual EO seeker, effectively engaging targets in day and night, utilizing ‘fire and forget’ or ‘fire and update’ operating modes, enabling the operator to home in precisely on a pinpoint target as the missile closes-in on the terminal phase of its flight, just prior to the attack, thus maximizing the missile’s effect while minimizing collateral damage, even under highly dynamic battle conditions. The communications between the missile and operator is conducted over a two-way wireless communications.

The Spike family of missiles is considered as the most mature and versatile multi-platform electro-optical precision attack missile in the market. Spike missiles are currently operating in several countries, including Israel, several Asian and Latin American countries, as well as a wide number of NATO countries. 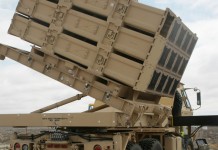