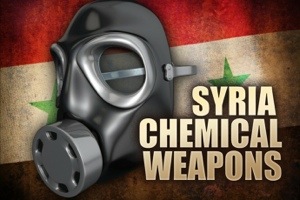 For years, Israel has sounded the alarm about the misuse of Syria’s chemical weapons stockpile amid the civil war. The new U.S.-Russian initiative to disarm Syria of its chemical weapons is a mixed bag for the Jewish state.

On the one hand, if the initiative is implemented in full, it would remove one of the Middle East’s largest caches of non-conventional weapons — a longtime strategic threat to Israel that sent residents here scurrying to get gas masks just a few weeks ago in case of war. On the other hand, numerous experts cautioned that the prospects for implementing such a disarmament deal are far from certain.

Implementing chemical disarmament in Syria will be an enormous challenge, and the prospects for accomplishing it are doubtful. Appreciable portions of the chemical weapons arsenal have been trans-located, in part untraceably. Syria possesses a huge chemical warfare alignment, with dozens of multiform facilities and installations. Just an up-to-date mapping of this alignment is a very complex mission. The plausible possibility that various Iraqi chemical and biological weapons were added to the Syrian CBW inventory significantly complicates the situation. Moreover, Syria is likely to methodically further develop biological weapons as a powerful alternative to chemical weapons; and the US-Russia accord does not deal with this.

“It is a good agreement if it will be implemented as written,” said Amos Yadlin, the former head of the Israeli army intelligence branch, who said the initiative represents a positive development for Israel regarding Syria’s chemical weapons. “But we have to take it a step further, and to ask ourselves what are the chances this agreement will be implemented? Unfortunately, I think the chances are low,.

Dr. Dore Gold, a former foreign policy adviser to Prime Minister Benjamin Netanyahu, said that the track record on disarmament of rogue regimes in the Middle East is far from impressive. Gold warned that Syria is likely to try to avoid full disclosure on its chemical weapons program, allowing it to move part of it outside of the country to places like Lebanon.

“The key to making this work is the threat of military force by the U.S.,” he said, noting that means keeping U.S. warships armed with cruise missiles stationed in the eastern Mediterranean within range of Syria. “Once the naval presence is removed — without the sense of urgency, Assad is likely to move to get out of the agreement.

A complicated and high-stakes game is playing out in efforts to force Syria to give up its chemical weapons. It’s a diplomatic initiative that has major implications not just for Syria, but for Iran, which has a large stake in the continuing conflict in Syria, as well as its own difficult negotiations with the international community over its nuclear program.

The next phase will see the US and Russia try to move the chemical stockpiles and warheads out of Syria (probably to Russia, which has a lot of experience in such projects) for the purpose of destroying them. At the same time, chemical weapons that cannot be moved out of Syria should be destroyed. All this seems very promising, but it is safe to assume that the tight schedule will be extended and that the inspectors will encounter difficulties from both the Assad regime and the rebels. They will constantly be in danger and will have to be protected by a special force. This requires a lot of preparations and funding. A top secret Syrian military unit had been given responsibility to move the arsenal of poison gas and munitions, raising questions about the feasibility of the Russian plan to secure the weapons. The weapons, which used to be concentrated in the country’s west, have already been deposited by Syria’s special unit 450 in over 50 sites in Syria’s north, west and south, according to Israeli intelligence sources.

Identifying and eliminating Syria’s chemical weapons stockpiles while the country is enmeshed in a civil war is an unprecedented challenge, made even riskier by rebel groups who may oppose the effort, analysts say. There has never been an effort to disarm an entire country of its chemical weapons during a civil war, Historically, eliminating chemical weapons programs could take years, even when a regime is fully cooperative. After Libyan leader Moammar Gadhafi agreed to relinquish his weapons of mass destruction it took a decade to remove its chemical stockpiles.

The U.S-Russian agreement makes provisions for removing the weapons and shipping them outside Syria for destruction, which could expedite the process. Still, that might require moving dangerous chemicals through unstable regions of the country. Eli Carmon, expert at the International Institute for Counter-Terrorism at the Herzliya Interdisciplinary Center warned that transferring out chemical weapons and destroying them is “impossible in the short term.” “There is great difficulty to take control of this arsenal, to check how large it is, how and where to transfer it, and how to destroy it,” Carmon said.

Syria is known to store chemical agents in “binary” form, where two components of the chemical agent are stored separately and only mixed before being loaded into munitions. This makes transport safer and simpler but can vastly expand the number of secret depots that need to be located and makes them easier to conceal.

Retired Lt Colonel Dany Shoham, an expert on chemical and biological weapons at the Israel-based Begin-Sadat Center for Strategic Studies, said in a study, that chemical weapons agents could be removed by air or by sea in a carefully coordinated mission. Those carrying it out would have to ensure that the weapons are not stolen and that there is no threat of an explosion or leak underway. According to his report, Syria is believed to have mustard, sarin and nerve agents such as VX, along with aerial bombs, artillery shells, rockets and ballistic missiles that can deliver chemical weapons. Destruction of the arsenal is also problematic, requiring a secure destruction facility to be developed and commissioned. Israeli experts say nerve gas has to be disposed of properly in locations with high temperatures and controls to keep gas from escaping to minimize the risk of accidentally gassing innocent people. The deadly effect of the chemical warfare agents produced at the el-Safir military complex near Haleb (Allepo) was demonstrated on the night of July 25, 2007, apparently by an accident, which happened while Syrian engineers working on a Scud C warhead. 15 syrians were reportedly killed in the explosion that, according to official Syrian sources, was caused by sympathetic explosion due to an uncommon summer heat wave.

One option reportedly being considered is moving the stockpile to a Russian naval base in Tartous, a regime stronghold on the Mediterranean, for eventual destruction. But chemical experts say that may not be feasible. The rail and road network passess through difficult mountain terrain, which is highly vulnerable to rebel ambush and hidden roadside explosives, which could create havoc with such highly lethal cargo, as chemical agents. Moreover, seen by Google Earth satellite photos, these transports have to pass also through dense population centers before entering into a safe environment specially prepared at the port for such dangerous shipment. “It is unlikely that the site would be able to house such huge quantities,” an Israeli weapons expert warned. But to implement the plan, Syria’s chemical arsenal must be moved out of the war-torn country. Analysts say there are only two countries, the United States and Russia, that have facilities that can deal with such large amounts.

The care America takes in eliminating its own chemical weapons reflects how dangerous the process is, even when it’s done in a safe and controlled environment. Since 1986, the protocol has been to incinerate the agent at temperatures above 2,000 degrees Fahrenheit or to neutralize it using hot water and a caustic compound. After the destructive phase, the next step involves extensive monitoring and testing of air, water, and soil to ensure no residual release. disposal was simply to dump munitions at sea. The United States did so until the early 1970s, when a global treaty outlawed such practices.

Incineration is controlled ignition of materials that converts them to ash, water vapor, carbon dioxide, and other products formed by combustion. Some types of chemical munitions contain propellants or explosives in addition to chemical warfare agents. After the contents of these weapons are drained, their empty casings might contain leftover materials that could be hazardous.

The nerve agent known as VX which is stockpiled in Syrian depots is the most dangerous substance to destroy safely. At Newport, Indiana VX has to be drained into a chemical agent transfer system.
The VX is then pumped into a reactor inside a contained and monitored area. Inside the reactor, the VX is hydrolyzed by adding a 200°F solution of water and sodium hydroxide. The empty ton containers are then washed and decontaminated by using a high-temperature heat treatment. This treatment is similar to that used to destroy waste material at the incineration sites.
The problem is that according to the US- Russian plan, Syria has been given until the middle of 2014 to destroy its chemical weapons stockpile. But in a country torn apart by civil war, the disposal process is likely to be fraught with difficulties

Major Russian chemical agent disposal facilites are located at Leonidovka in Khansakstan, recycling “complex weapons” that contain both toxic agents and bursting charges. Their disposal requires the use of complex and costly technologies The Maradykovsky chemical weapons disposal plant in the Kirov region disposed of over 6,900 tonnes of toxic agents kept in its arsenals and finished destroying 232.6 tonnes of sarin and more than 150 tonnes of yperite-lewisite mixtures. The Pochep site in the Bryansk region stored over 7,500 tonnes of nerve gases and plaid a special role in the final stage of the federal chemical disarmament programme.

All these complex facilities may be viable to cope with Bashar Assad’s lethal arsenal. However, The according to the US-Russian plan Syria has been given until the middle of 2014 to destroy its chemical weapons stockpile, which under mentioned circumstances seems dubius at best, id not a “mission impossible in a country torn apart by civil war.