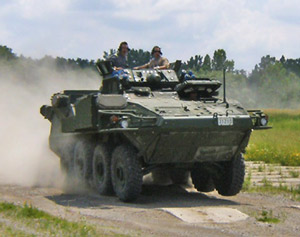 DRS Technologies announced Tuesday, October 22, that the Trophy Actie Protection System it has integrated on a General Dynamics LAV III successfully completed a series of firing tests in Canada. The tests were performed in cooperation with General Dynamics Land Systems (GDLS). The APS, developed by Rafael, was integrated on the LAV III under a ten-month combat vehicle integration and live fire testing program featuring Active Protection technology.

As part of its strategic initiative to demonstrate next generation anti-armor survivability technologies for its combat vehicle fleets, and following an international tender process, GDLS chose the combat-proven Trophy Active Protection System for its full-scale integration and testing program on a General Dynamics LAV III armored vehicle.

DRS and Rafael Advanced Defense Systems, partners on the Trophy system, worked in close cooperation with GDLS to perform the detailed mechanical, electrical, and electronic systems design integration and installation of the Trophy system on the LAV III without degrading the original performance level of the vehicle.

“The successful performance of Trophy during the test program, coupled with the robustness of the vehicle integration design, demonstrates that Active Protection technology – and the Trophy system in particular – is both effective and mature,” said Joseph Matteoni, Vice President/General Manager of DRS Sustainment Systems Inc. “We owe it to our troops to do the utmost to avoid another “IED-like” surprise on the next battlefield.”

Trophy has already been fielded in large numbers to tank units of the Israel Defense Forces and has proven to save lives in several documented combat engagements.  Capable of defeating the full spectrum of direct fire, anti-armor rockets, missiles, and tank-fired high-explosive rounds, the system rapidly detects and tracks an incoming threat, classifies it, computes the optimal intercept point in space, and, if necessary, neutralizes it away from the platform. Additionally, the system reduces the probability of collateral injury in the vehicle vicinity to below one percent.

Trophy also calculates the location of the shooter, alerts the crew for immediate action, and reports the engagement to the battle management network for situational awareness across the formation.