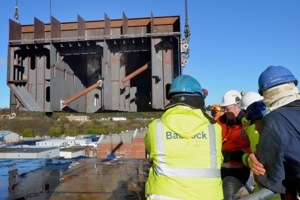 Pictures released by the Aircraft Carrier Alliance yesterday show the ramp section, which will allow jet aircraft to take off from the ship, being lowered into place at the shipyard in Rosyth, Scotland, where the Queen Elizabeth Class carriers are being constructed.

The 300-tonne section of ramp, which is 64 metres long and 13 metres wide, is the final exterior piece of the aircraft carrier to be fitted. At its highest point, the take-off ramp is 6 metres above the flight deck, which will allow aircraft to be propelled into the air.

The pictures come on the same day as MOD announces that a fourth Lightning II Joint Strike Fighter aircraft has been ordered from Lockheed Martin. The UK has already taken delivery of 3 Lightning II jets and Royal Navy and RAF pilots are training on the aircraft in the USA.

This fourth jet, which is specially designed to be a test aircraft, will help boost the ongoing training available.

Earlier this year, the first take-off at sea by a UK pilot in a Lightning II took place during a week of trials aboard the United States Marine Corps’ amphibious assault ship USS Wasp.

“We are on track to ensuring carrier strike capability by 2020. Both the completion of the take-off ramp and the announcement of the contract for the fourth jet show the tremendous progress being made to ensure that the Royal Navy will have a modern carrier force.” Philip Dunne, Minister for Defence Equipment, Support and Technology confirmed. 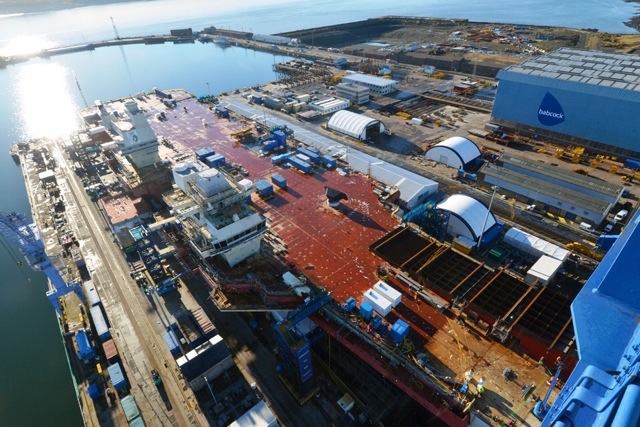 The forward ramp section in place on the Queen Elizabeth at the shipyard in Rosyth (Photo: Aircraft Carrier Alliance)

Tamir Eshel - Jun 13, 2021
0
During the recent 'Guardian of the Walls' operations in Gaza, Israel's Defense Forces (IDF) employed swarms of unmanned systems to strike inside the enemy area to seek and destroy hidden targets. This was the combat debut of a new capability developed by the IDF that demonstrated the great value of manned-unmanned operations at the tactical edge.