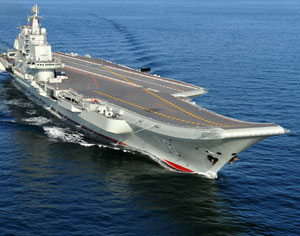 China’s sole aircraft carrier CV-16 Liaoning has departed the northern homeport of Qingdao for its first deployment in the South China Sea, where China faces another dispute with Vietnam, Taiwan and the Philippines over claims on other island groups. The official Xinhua News Agency said the cruise aims to test the Liaoning’s crew and equipment over long distances and a variety of sea conditions.

Since entering service last year, the carrier has conducted several rounds of sea trials in the relatively tranquil waters off China’s northeast coast. The Liaoning has launched and recovered the J-15 ‘Flying Shark’ jet fighters but not yet been given its full complement of aircraft.

It is the first time the carrier has embarked on a cross-sea training voyage since it was commissioned into the People’s Liberation Army navy last year, Liaoning Captain Zhang Zheng said. It is also the first time the Liaoning is deploying as part of a naval battle group – on its mission the carrier is escorted by two Type 051C missile destroyers, the Shenyang and Shijiazhuang, and two Type 054A missile frigates, the Yantai and Weifang. The vessels are also expected to be joined one of the existing oilers, supporting the carrier at sea. The Chinese Navy has yet to acquire faster and more capable replenishment ship suitable to provide the supplies to support the carrier task force.

“The Liaoning has been on training voyages in the Yellow Sea and East China Sea, which have shallow waters but numerous civilian ships passing by.” Major General Yin Zhuo, director of the Chinese Navy Information Expert Committee said a voyage of at least several weeks and up to as long as two months in heavy seas is crucial for a comprehensive test of the carrier’s equipment. The Liaoning also needs such a voyage to train its crew and to decide on an appropriate personnel deployment, he added. “We also need to see the carrier’s fighters take off and land in various types of wind and waves for testing and training.” Yin confirmed. Earlier this month, three J-15 Shark fighters took off almost at the same time from three areas on the carrier’s deck, one year after the first fighter took off successfully from the Liaoning.

With the progress of the carrier, the People’s Liberation Army Navy (PLAN) is taking delivery of the first serial production Shenyang J-15 Flying Sharks, the first aircraft that have been delivered were recently spotted painted sea-grey color, unlike the previous models that were painted yellow, and used for the carrier qualification tests and pilot training.