India’s newest and biggest ever warship, the aircraft carrier INS Vikramaditya, has arrived yesterday at its home port of Karwar in Karnataka, in the southwestern coast of India, after an uninterrupted six-week sail from northern Russia. In November 2013 the 44,500 ton vessel completed a modification and refurbishment process that lasted nine years.

The aircraft carrier will now go through another refitting necessary to support the air wing that will be operating on board, and new armament, including Barak air and missile defense systems and mission systems that could not be installed in Russia. In few weeks the carrier will begin to support carrier qualification for Indian Navy pilots. The ship has the ability to carry over 30 aircraft comprising an assortment of MiG 29K/Sea Harrier, Kamov 31, Kamov 28, Sea King, ALH-Dhruv and Chetak helicopters. On its way to India Vikramaditya was escorted by a number of naval vessels, including the carrier INS Viraat. As the two carriers were sailing in close formation, Sea Harrier fighters aircraft and Ka-31 helicopters operating from INS Viraat performed simulated landings and take offs on the Vikramaditya.

At present, Indian pilots are being trained on simulators to operate from the confines of the small flight deck. A shore-based training facility in Goa, where the MiG 29 K fighter squadrons will be based, is also set to start training pilots on landing and taking off from the carrier. The facility is a replica of the Vikramaditya flight deck — for both taking off from a ski jump and landing with arrestor wires.

The certification of both pilots and air controllers has to be completed before the ship can formally join the fleet. A team of around 83 Russian personnel, who sailed with the ship, will remain in Karwar over the next year as part of the one year guarantee of the Sevmash shipyard, the Indian Express wrote.

The new carrier introduces many capabilities the Indian Navy did not have sofar. To support fixed wing and rotary wing aircraft the ship is equipped with state of the art launch and recovery systems along with aids to enable smooth and efficient operation of ship borne aircraft. Its distinctive ‘ski jump’ deck elevating 14 degrees at its tip enables the launching of MiG-29K and Sea Harrier jets without the use of catapult. While the Ski Jump architecture has already been used in existing carriers such as Viraat, it was designed to support Vertical/Short Take-Off and Landing (V/STOL) aircraft such as the Sea Harrier and helicopters, but not the fixed wing aircraft like the MiG-29K, which otherwise require catapult. The MiGs will recover back on board using arresting cable. Other systems supporting aircraft operations include the LUNA Landing system for MiGs, DAPS Landing system for Sea Harriers and Flight deck lighting systems.

The heart of the operational network that infuses life into the combat systems onboard the ship is the Computer aided Action Information Organisation (CAIO) system, LESORUB-E developed by the Russian MARS IT concern. LESORUB has the capability to gather data from ship’s sensors and data links and to process, collate and assemble comprehensive tactical pictures. This state of the art system has been specifically designed keeping in mind the essential requirement on the carrier for fighter control and direction.

Another prominent equipment crowning the super structure’s island is the Resistor-E radar complex. As a primary situational sensor the vessels’ radar maintains a surveillance bubble of over 500 kms around the ship; Resistor-E also provides an automated sensor for air traffic control, approach/landing and short range navigation for ship borne aircraft. The system supports airborne mission planning and in-flight navigation providing flight data to aircraft operating at extended ranges from the mother ship. The precision approach guidance system aids the fighters on approach to be directed down to a distance of 30 meters short of flight deck. 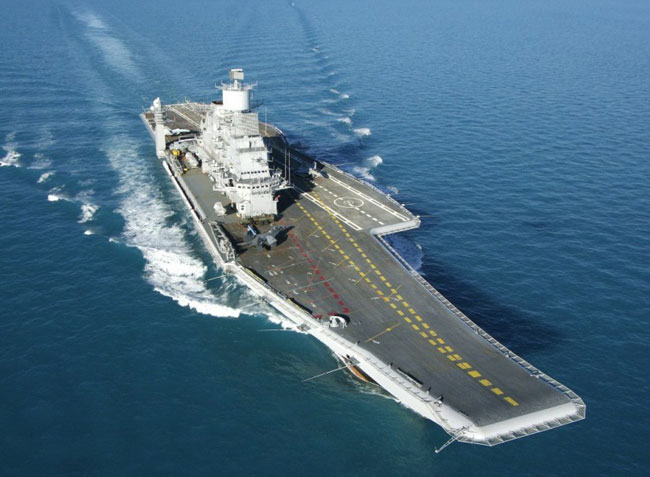 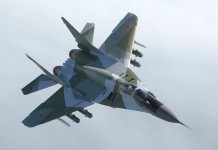 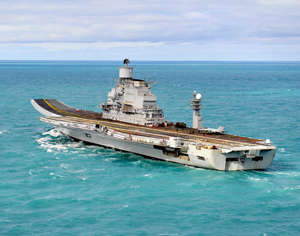