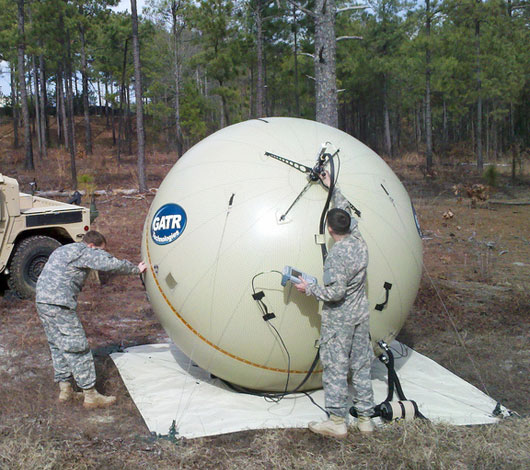 GATR Technologies announced today that it has been awarded a contract to deliver Inflatable Satellite Antennae (ISA) to the US military at an aggregate amount of up to US$440 million.

The key innovation of GATR’s antenna is a flexible parabolic dish mounted within an inflatable sphere, reducing weight and packaged volume by as much as 80 percent and thereby improving the agility of deployed military and disaster response personnel. According to GATR, their ISA antenna costs less to procure than conventional deployable SATCOM antennae systems, and dramatically cuts transportation expenses due to its lightweight design. Finally, the larger dish size enables more efficient use of satellite bandwidth capacity, increasing bandwidth for users and allowing more users to communicate simultaneously. GATR currently supports 1.2, 1.8 and 2.4 meter diameter sphere dishes. These antennas perform like rigid deployable antennas of the same size, but provide significant reduction in the logistical size and weight.

The rapid response benefits of the ISA was demonstrated last month when seven systems were deployed in the Philippines to support the recovery efforts after the devastation of Typhoon Haiyan. High-bandwidth communications are vital in coordinating efforts of this magnitude, especially when the communications infrastructure has been destroyed. GATR sent two systems to support Cisco TACOPS (a mobile team that quickly deploys to support emergencies that affect communications). Global DIRT and emergency.lu have also deployed their own GATR systems. Together these were among the first high-bandwidth satellite communications terminals deployed in key areas.

According to Gierow, U.S. and Allied militaries have fielded over 300 GATR ISA terminals since 2008, proving the technology’s strength and reliability. “We were extremely fortunate to leverage early Small Business Innovative Research contracts and Quick Reaction Funding from the Department of Defense to help us initially field and improve our technology.” Gierow noted, “This contract allows conventional forces to take advantage of the same cost savings and lighter profile already benefitting the Special Operations community, Marine Corps Expeditionary Units, and other early adopters.”