To deliver accurate data for precision weapon systems, the target acquisition process should rely on self positioning measurements of the highest accuracy. Global Positioning Satellite (GPS) systems were designed to deliver accurate position location, particularly when operating in the ‘military band’. But the GPS system is vulnerable to jamming, deception and interference (spoofing) that could turn it into the ‘weakest link’ of the targeting chain.

A GPS receiver’s job is to locate four or more of these satellites, figure out the distance to each, and use this information to deduce its own location. This operation is based on a simple mathematical principle called ‘trilateration‘.

The GPS system relies on measuring the distance to at least three satellites of the GPS constellation. But, when deceptive signals are transmitted, and mimic those satellites or jam their signals, the results processed by GPS receivers could vary significantly.

But what if a receiver would rely on much larger constellations – star tracking rather than satellite tracking? Northrop Grumman Corporation recently announced an agreement with Trex Enterprises, to integrate Trex’ celestial navigation technology with its precision targeting systems provided to the U.S. military and allied forces. These methods used by seamen for thousands of years have also been employed by artillery forces, for site surveying. During the Cold war it was also used by bomber navigators, to determine the bomber position independent of external signals. In recent years the US Navy is also interested in implementing these stellar trackers as part of the Naval Aviation realignment to improve its capability to penetrate contested and denied airspace.

“The integration of celestial navigation technology marks an important milestone on the precision targeting technology roadmap,” said Gordon Stewart, vice president and general manager of Northrop Grumman’s Laser Systems business unit. “We will continue to refine and grow the application of celestial navigation for precision targeting across our production laser systems for U.S. and coalition warfighters.”

Trex Enterprises’ is developing a multi-aperture stellar tracker able to detect stars during daylight. Trex has developed proprietary automated star pattern recognition algorithms. Working with the U.S. Navy, Trex has developed and demonstrated the Daytime Stellar Imager, an infrared sensor capable of seeing stars in daylight and at night, thus being able to create an alternative navigating system. Such system could be used onn naval surface vessels and aircraft, independent of global positioning systems (GPS) or Inertial Guidance Systems (INS). The system can deliver precision azimuth reference, for precision pointing at sea and on battlefield. Trex Enterprises developed the automated the star detection capability and pattern recognition algorithm. The system can detect a 6.3 magnitude star at daytime, at sea level.

As one of the world’s leading manufacturers of military electro-optical (EO) targeting systems, Northrop Grumman Laser Systems has fielded thousands of portable, lightweight targeting and laser systems for ground troops and ground vehicles. The company has entered into a licensing agreement with Trex Enterprises that allows Northrop Grumman to produce and integrate Trex’ celestial navigation capability into ground targeting systems, thus improving target location precision, particularly in certain situations where reliance on other sensors is denied. The new capability has been qualified for the ground soldier targeting systems, and, according to the manufacturer, celestial navigation enhancements are already being delivered to support the immediate needs of deployed soldiers. 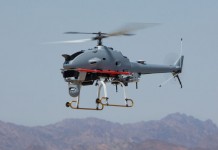 Yamaha, Northrop Grumman to tailor a Rotary UAV for the US Market