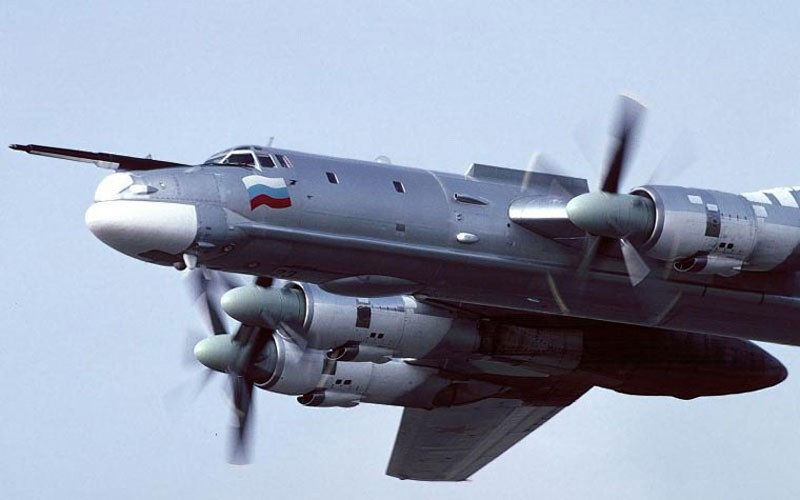 Russian bombers Flying on a 16 hour training mission over the North Sea, two Russian Tu-95 bombers (NATO reporting name: ’Bear’) were intercepted yesterday by British, Dutch and Danish fighter jets. It is not the first time such an event happens, but this one has attracted the media attention due to the heightened tension over Russian military activity in Ukraine. The two bombers, built to carry nuclear weapons, were flying a direct route on Wednesday north from Russia’s Kola Peninsula towards the Bear Island in the northern part of the Barents Sea. North of the Bear Island, they turned around southwest towards the Norwegian Sea and continued south towards the North Sea.

The Russians confirmed that Tu-95MS strategic bombers were on a mission over international waters of the North Sea. On these flights air crews are trained to navigate over featureless terrain and perform aerial refuelling. On part of their mission the bombers were escorted by MiG-31 supersonic interceptors. An A-50 airborne early warning aircraft also supported the mission. The Russian Defense Ministry insisted that these flights are carried out “in strict accordance with international regulations” and do not violate the borders of other countries.

“The flight route was over the neutral waters of the North Sea, along the Kola Peninsula. The aircraft have flown some 12,000 kilometers. The flight duration exceeded 16 hours”

As the bombers approached Scotland, RAF Typhoons scrambled to investigate two targets, initially detected by radar. At that time the “Bears” were nearing UK airspace off the north-east coast. After contact with the fighters, from RAF Leuchars in Fife, the Russians turned and flew in the direction of Scandinavia. RAF Leuchars is primarily responsible for maintaining Quick Reaction Alert (Interceptor) North, providing crews and aircraft at high states of readiness, to police UK airspace and to intercept unidentified aircraft. The base operates Typhoon jet fighters in two units -No 6 and No 1(Fighter) Squadrons.

Russian sources indicated that the strategic bomber force regularly performs routine flights over neutral waters of the Arctic, the Atlantic, the Black Sea and the Pacific Ocean. These flights sometimes prompt a reaction by neighbouring countries. Japan has scrambled aircraft to escort such flights several times since the beginning of the month. Scrambling the Typhoons by the RAF does indicate a level of concern, Ministry of Defence officials dismissed the incident as routine, claiming indicate there were eight similar contacts last year.

The following images released by the UK MOD today, are showing the two Russian bombers and Typhoons, shadowing them from above. Photos: MOD, Crown Copyright

“The aircraft did not enter UK airspace. The Russian aircraft remained in international airspace at all times as they are perfectly entitled to do. Russian military flights have never entered UK sovereign airspace without authorisation” an MoD spokesman said: Other NATO members did not welcome the Russian Bears either. The Royal Netherlands Air Force scrambled two F-16s from Volkel air force base to intercept them. Denmark also escorted the Bears away from their controlled airspace; the Danish F-16s escorted the Russians until they approached UK airspace and RAF Typhoons took over. The Norwegians decided not to scramble their F-16s, as the Russians were flying too far from Norwegian airspace.

“Intercepting Russian Bear aircraft is a routine occurrence for us, it’s what we do to maintain UK Sovereign airspace.” 6 Squadron Typhoon Pilot Flt Lt Gary Montgomery said, “We scrambled on 23 April to intercept two unknown aircraft approaching the NATO Air Policing Area from the north.  We intercepted and flew within visual range and identified them as Russian Tu-95 ‘Bear H’ aircraft.  We monitored their progress, including handing them over to Danish F-16 QRA aircraft as the Bears flew towards Denmark, then continued to monitor them as they returned and then departed towards Norwegian airspace.  During the sortie we air refuelled from a RAF Voyager aircraft, from RAF Brize Norton, to increase our airborne endurance.” Montgomery added.