The first opportunity to see those vehicle is the Special Operations Forces Exhibition & Conference (SOFEX), taking place in Amman, Jordan this week.

The expanded ‘global M-ATV’ family of vehicles includes two multi-mission models – the M-ATV Standard and M-ATV Extended, each with multiple variants. The M-ATV Standard is designed to provide response and support capabilities for a range of offensive and defensive missions in off-road environments. The M-ATV Extended delivers increased capacity for additional troops and equipment to support a wider assortment of mission profiles, such as mounted infantry support, explosive ordnance support and command-and-control.

“The Oshkosh M-ATV already stands alone as the battle-tested, highly mobile MRAP of choice for a full range of missions,” said John Urias, Oshkosh Corporation executive vice president and president of Oshkosh Defense. “Our new M-ATV variants expand on this life-saving platform to address a more diverse mix of mission profiles and specialized functionality, threat levels and cost targets, so troops get the vehicle that’s right for their specific needs.” Those variants include:

Collectively, the family meets a wider range of protection, performance, payload and transportability requirements for peacekeeping, internal security, border security, special forces, counterinsurgency and conventional military operations. Those vehicles are provided with Oshkosh TAK-4 independent suspension system, and integrated cab crew protection. The M-ATV has been in service with U.S. Forces since 2009 to meet an urgent need for a lighter, more mobile MRAP vehicle. Following its extensive use by the US forces in Afghanistan, M-ATV is evolving to meet a more diverse range of mission requirements, particularly with military forces in the Middle East and North Africa (M-ATVs are already in service with the UAE and Saudi Arabian military). 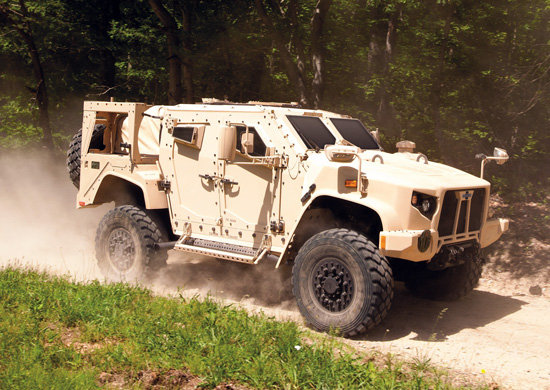