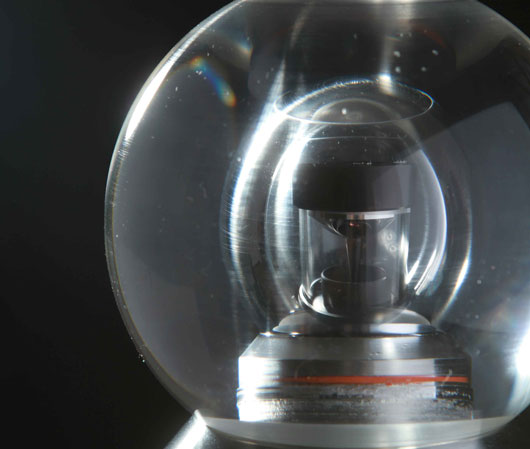 A new camera developed by Battelle will greatly reduce the time, effort and expense needed to create complete 360-degree viewpoints in the depths of the ocean or in other hard to reach places.
The HorizonVue M360 Deep, as the camera is known, combines Battelle’s long history in maritime engineering technology with RemoteReality’s specialized optic designs and software to create a unique instrument capable of providing continuous 360-degree video feed at the ocean’s surface or depths of up to 10,000 feet.

Intended for use by the ocean science community, it can be installed on underwater robots, remotely operated vehicles (ROVs), submarine periscopes, or other stationary observation platforms. The camera also could be used by the oil and gas industry for enhanced underwater awareness in harsh environments.

The camera can image 360 degrees without the need for any moving parts, which reduces the complexity and ultimately increases reliability

Current technologies rely on multiple cameras including those that can pan, tilt and zoom. For example, Google trucks drive down the street with numerous cameras that capture images which are then “stitched” together to create the panoramic view, which takes time. During the Gulf Oil spill, underwater footage was captured by ROVs with multiple cameras.

The HorizonVue M360 Deep can perform all these activities with just one camera and is lighter, smaller and uses less power than others on the market. An acrylic housing protects the camera so that it can withstand 5,000 pounds of pressure per square inch.

“The camera can image 360 degrees without the need for any moving parts, which reduces the complexity and ultimately increases reliability,” said Brad Thomas, a mechanical engineer at Battelle who designed the camera.