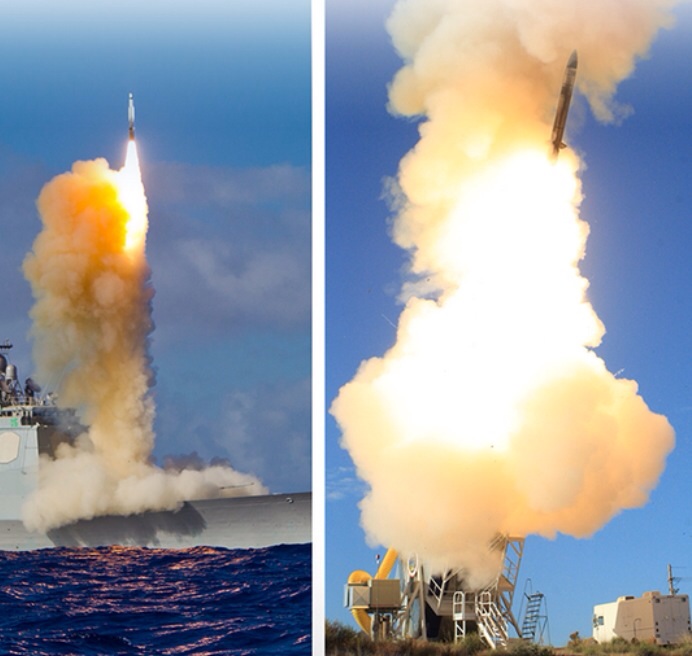 The U.S. Missile Defense Agency conducted the first flight test of the Raytheon-made Standard Missile-3 from the Aegis Ashore weapon system. Aegis Ashore will provide the effector (missile interceptor) operated by the joint U.S.-European missile defense capability to be deployed in Romania by 2016. The system will protect U.S. deployed and NATO forces in Europe from ballistic missile attack.

The recent flight did not include an intercept, but tested the safe launch and fly-out of an SM-3 Block IB against a simulated target; an intercept flight test is scheduled for 2015.

The test, known as Aegis Ashore Control Test Vehicle-01 (AA CTV-01) flight test, is the first live fire event for the Aegis Ashore system at the Pacific Missile Range Facility (PMRF) in Hawaii. During the event, a Standard Missile-3 (SM-3) Block IB guided missile was launched while a simulated target was tracked by the Aegis Weapon System. This is the first Aegis BMD system test using a land-based missile launcher.

The land-based system uses the sea-based Aegis BMD and deploys it in a land-based application using the newest generation of BMD, known as BMD 5.0 and the same SM-3 missile deployed on Aegis Ballistic Missile Defense ships. The system currently holds 24 SM-3 missiles at one time. The Aegis Ashore system also possesses the capacity for additional launchers and missiles. The system will deploy with the latest SM-3 Block IB.

“The SM-3 Block IB deployed for the first time earlier this year at sea, and the success of this Aegis Ashore test keeps us on track to deploy the missile on land in 2015,” said Dr. Mitch Stevison, Raytheon’s Standard Missile-3 senior director.

The first Aegis Ashore system is installed in a deckhouse at the Pacific Missile Range Facility (PMRF) in Hawaii. The second system will be delivered to Romania for operational capability in 2015. According to the European Phased Adaptive Approach plan for missile defense, the first Aegis Ashore site will be operational in Romania next year. The second Aegis Ashore site is on track for Poland in 2018. Both sites will be capable of launching SM-3 Block IAs, IBs and IIAs (2018).

“As it deploys to Romania next year and to Poland in 2018, Aegis Ashore is a tremendous and critical asset for NATO to pursue its collective resolve to protect and defend Europe” said Riki Ellison, Chairman, Missile Defense Advocacy Alliance (MDAA). Allison added that the test tonight proved three important competencies in its deployment to Romania:

– The validation of communication from the Aegis Ashore site with constant persistence to the second and third stage of the launched SM3 1B interceptor in its guidance for a correct path towards the target.

– The validation of the accuracy of a “launch on remote” above ground interceptor site that is much further away from the Aegis Ashore site than it would be if the interceptors were on a Aegis BMD ship.

– The validation of the increased safety measures for the surrounding area and Pacific Missile Range Facility for the requirements of this interceptor and system to launch from an Aegis Ashore land based site.