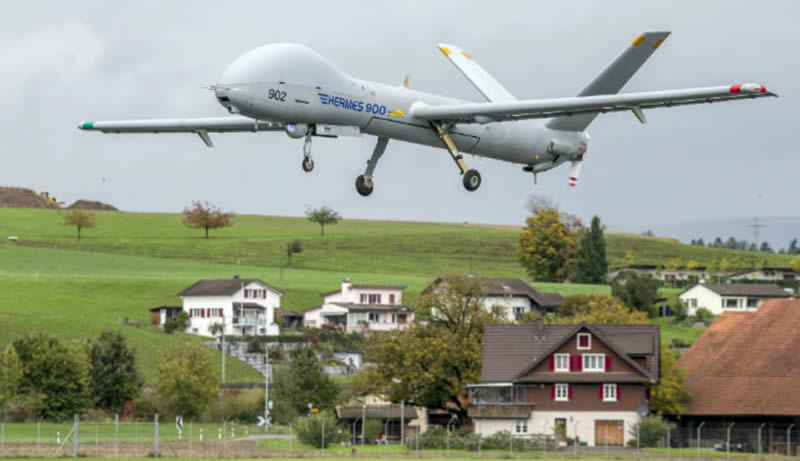 Switzerland has selected the Israeli Hermes 900 Medium Altitude Long Endurance (MALE) unmanned aerial vehicles (UAVs) made by Elbit Systems, as the successor for IAI/Ruag Ranger UAV (ADS 95 system) that has been in service with the Swiss Air Force since 2001. The selection was announced yesterday (June 5) by Armasuisse, Switzerland’s defense procurement agency.

The Swiss evaluation focused on two Israeli drones – the Hermes 900 and IAI’s Heron I. The final evaluations carried out in Switzerland in late 2012 included test flights by both systems. In the pre-evaluation, these two UAV systems were the best in meeting the requirements.

The Swiss evaluation preferred the hermes 900 over its competitor the Super Heron built by Israel Aerospace Industries. Armaswiss said the Hermes 900 HFE has been favoured because it delivered the better overall result in all assessed criteria.

The Super Heron was officially unveiled in February 2014, was positioned between the combat proven Heron I MALE drone and the much larger Heron TP. Switzerland has evaluated the heron I with the standard Rotax 914 engine, and was also offered the slightly larger ‘Super Heron’ variant that can be powered with a Heavy Fuel Engine (HFE).

The Swiss selection opted for the hitherto unannounced Hermes 900HFE – a designation hinting on a model powered by HFE engine. Elbit Systems has used HFE engines in the past, in the Hermes 90, a version of the Hermes 450 powered by an HFE has also been displayed. Aviation certified HFEs are providing more robust propulsion for UAS, albeit heavier and more expensive. It also alleviate a major concern for operators having to support drones from forward operations bases or at sea, where the delivery and storage of highly flammable gasoline would be risky and more complex than handling of military standard JP8 diesel fuel, commonly used for automotive propulsion.

The Hermes 900 HFE system will enable the Swiss military to perform reconnaissance and intelligence gathering missions under all-weather conditions, day and night. Its operation is more flexible, it has longer endurance in the air and a wider operational range than the Ranger system currently in use.

The drone’s integral satellite communications system enables unobstructed control of the system beyond line of sight, particularly when deployed across mountainous areas. the Hermes 900 is designed with a 2.5 meters long bay that can accommodate internal payloads, additional sensors or fuel. This payload bay can carry up to 250 kg, allowing quick installation and replacement of payloads.

The swiss drone will be used for reconnaissance missions and will be unarmed. Armaswiss confirmed that there are no plans or future options to arm UAVs in Switzerland. Valued about US$ 280 million (CHF250 million) the Swiss UAV procurement program will span over five years until 2020, when the Rangers will be phased out of service.

The proposed system acquisition, designated ‘ADS 15’ is likely to be included in the 2015 armaments programme submitted to the approval of the Swiss parliament. The first Hermes 900 drones are expected in Switzerland by 2017. Since its introduction in 2009 the Hermes 900 UAS has won Elbit Systems eight orders – from Israel, Chile, Brazil, Mexico and Colombia.