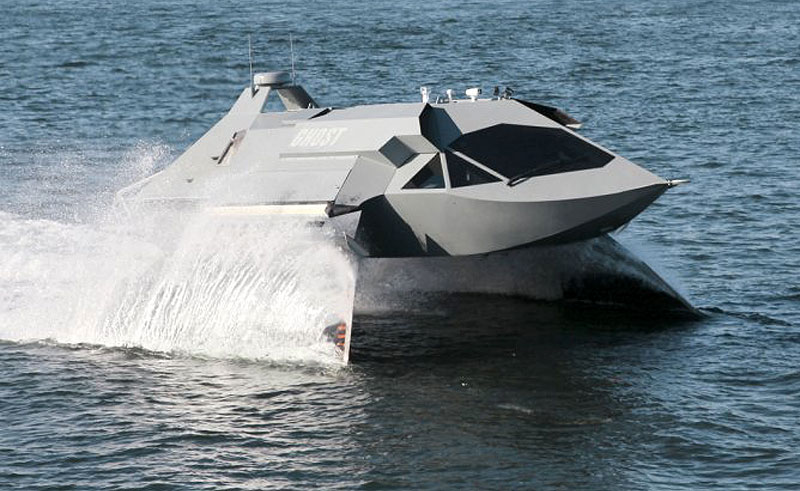 Juliet Marine Systems a small company from Portsmouth, N.H., has developed a unique high-speed watercraft called Ghost that could take on missions close to shores, where larger vessels, such as the Littoral Combat Ship (LCS) would normally be too vulnerable to operate – company officials say. While initially the Ghost design was offered for fast patrol, special operations and force protection missions, Juliet Marine is now promoting a scaled-up corvette version ‘super Ghost’ for the US Navy re-evaluation of the Littoral Combat Ship force structure.

“With Ghost you can you can get into denied-access ocean areas, monitor what’s going on, launch operations and leave, and no one knows you’re there”

Plans are to build a corvette-sized 46 meter (150 ft) ‘super Ghost’ at a cost of about $50 million per vessel – six times cheaper than the $300 million per-ship cost of a current Freedom-class and Independence-class littoral combat ship. Such a vessel could operate with LCS or with other oceangoing naval vessels, providing a more affordable, agile and survivable naval strike forces.

Started as a privately funded venture, the Ghost development began in 2008, leading to the completion of the prototype in early 2010, at an investment of US$15 million. Each vessel is estimated to cost about $10 million. Apart from the US Navy, other government agencies and special forces which could be interested, Juliet Marine has been in high-level discussions with a foreign nation interested in 25 Ghosts for potential sale $300 million. Bloomberg Businessweek reported.

“With Ghost, you can get into denied-access ocean areas and loiter for 30 days with the fuel on board. You can listen to cell phone conversations, you can monitor what’s going on, you can launch operations and leave, and no one knows you’re there.” Gregory Sancoff told Bloomberg, “That’s not something the government can do right now.”

The craft is built of a main hull which is lifted above water when the Ghost is moving at speeds over eight knots. Its powerplants comprise of two T53-703 turboshaft engines seated in pontoons, powering a counter rotating propeller located at the front of each pod. The propellers are creating ‘supercavitation’ effect, enabling the pod (carrying the entire vessel) to move through the bubble trail rather than the denser sea-water, thus able to achieve 900 times less hull friction, compared to a conventional watercraft.

This effect enables the vessel to cut through waves of 10 feet at high speed, remaining extremely stable by employing computer controlled stabilization using ‘fly by wire’ controls. In testing sorties the Ghost has already achieved a speed of 30 knots and is expected to reach the 50-knot range, matching the top speed of much smaller fast attack boats. The fully computerized control enables the vessel to become a truly stealthy ghost ship, operating on extended missions without humans on board.