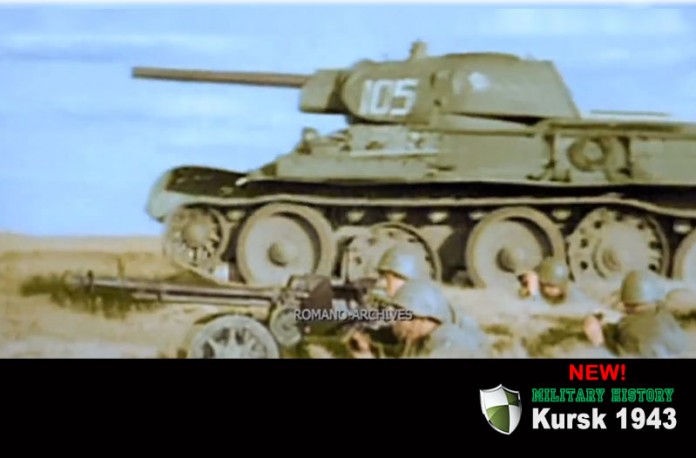 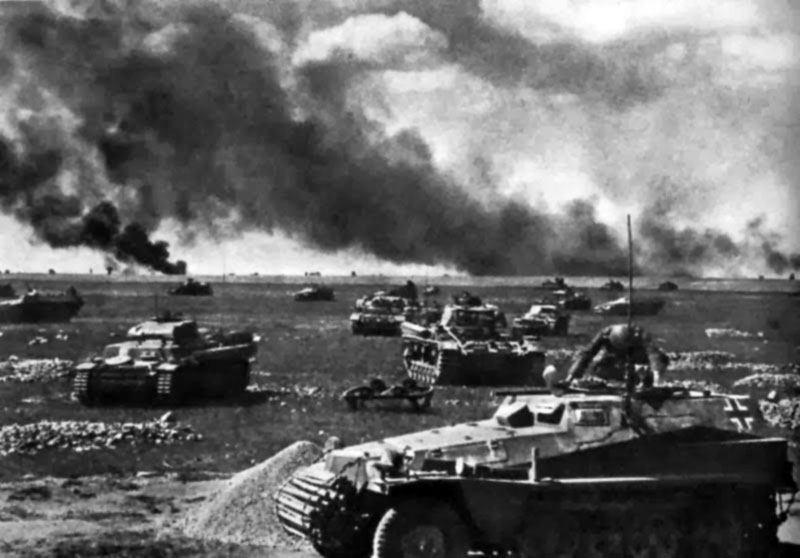 Introduction into the Scene of Battle

70 years ago, the great Battle near Kursk took place. It was long claimed being one of the largest tank battles in history. Following their disastrous defeat at Stalingrad during the winter of 1942-43 the German summer offensive in the Kursk enclave, code-named Operation “Zitadelle” led into the heaviest armored clashes ever fought in such a confined area. The climax of this horrendous carnage took place near the village of Prokhorovka which is about 140 km from the city of Kursk.

The original German plan, was to pinch off a large bulge created in the Eastern Front, extending 70 miles westward, presenting an ideal target for a twin pincer attack, which German Panzer leaders had successively mounted with devastating effect. If their plan succeeded, the Germans would encircle and destroy more than five Soviet armies, letting the “Victory Bells” ring in Berlin again, after the moral blow of the Stalingrad catastrophe shattered the peoples’ mood. Moreover, it would have forced the Soviets to delay their planned summer offensive and might have allowed the Wehrmacht its desperately needed breathing space on their battered Eastern Front.

The frontal bulge created in the front-line around Kursk made it an obvious and tempting target to the Wehrmacht. But by allowing the Germans to strike first at the target area would give the Red Army an opportunity to wear down German Panzer formations against pre-prepared positions, thereby shaping the force in its field ratio heavily against the enemy. Once the initiative had been achieved and the enemy had been worn down sufficiently, well concealed strategic reserves would be committed to finish off the remaining German force. This indeed was the plan of the Soviet high command (Stavka) in Moscow. The problem was that it hinged on a very thin threat of luck, because the Germans had placed everything on a single card, massing all their armor to be thrown into this Bulge to achieve a strategic victory, on which depended the entire campaign in Russia. Some of their generals were expressing concern over concentrating all their available power in, what they considered a dubious campaign on which they had serious doubts as to its successful outcome. But on Hitler’s direct order, no less than 2700 panzers and assault guns and 23 infantry divisions were earmarked for the Battle of Kursk.

Much of the long under-strength German Panzer units were of minor combat value, being equipped largely with virtually obsolete MkIII or MkIV still mounting the short barrel 50 and 75mm gun, although a large part of the latter were sent, almost at last minute, with the new MkIVG version, mounting the more effective and longer 75mm KwK 40 L/48 gun. Nevertheless, the Panzerwaffe poised for action in Summer 1943 was a most powerful adversary. The Stavka in Moscow was fully aware on what was in stake and prepared itself to defeat the German plan, cost what it takes. And indeed, the loss in manpower and Materiel was to be horrendous, remaining a source for painful memories and inevitably, also long disputable myth for decades.

The foremost commander masterminding the Zitadelle Campaign was one of Germany’s greatest strategists, Field Marshal Erich von Manstein. Born into an aristocratic Prussian family with a long history of military service. Following a notable combat career in WW1, Manstein displayed brilliant strategic outlook, mastermining the dramatic drive through the believed “impassable” Ardennes, which brought to the fall of France in 1940. After a series of excellently conducted defensive battles against overwhelming enemy forces, he was given command of the armor heavy Army Group South, achieving the deepest penetration into the Soviet defenses, until embroiled in the notorious tank battle at Prokhorovka.

Marshall Fyodorovich Vatutin facing Manstein on the Russian side, took command of the Voronezh Front, preparing for the momentous Battle of Kursk, he rejected conventional echeloning of armies; his innovative deployment allowed him not only skillfully conducting the defense against the technically superior Germans, but also to quickly switch from defense to offense, when time was ready. The overall command designated by Stavka was to Marshall Georgy Konstantinovich Zhukov, perhaps the most famous Russian commander in WW2. Born into a poverty-stricken peasant family, he already became noticed, when commanding the First Soviet Mongolian Army Group in 1938, saw action against Japan’s Kwantung Army on the border between Mongolia and the Japanese-controlled state of Manchukuo. The campaign at Khalkhim Gol had significance beyond the immediate tactical and local outcome. Zhukov demonstrated and tested here the techniques later used against the Germans in Russia. Evaluation some of the problems inherent in the performance of the BT tanks led to the replacement of their fire-prone petrol (gasoline) engines with diesel engines and provided extremely valuable practical knowledge that was essential to the success in development of the excellent T-34 medium tank.

This is a review of books related to the Battle, it does not contain all available books, also the latest publications are not included, but this review is worth reading to get an insight into the main topics, before choosing a reliable book to study.

The Battle of Kursk

by Col, retd David Glantz ISBN 0-7006-0978-4, 2009, 472 pages
This is probably the best researched book on the Battle at Kursk. Written by a veteran military researcher and historian, it best used as a reference source. Although quite difficult to read from start to finish, it is packed with details, data and sources, both German and newly released Russian. Problem are the maps, which are so packed with numbers that they are quite impossible to understand- their background is grey and place names near unreadable. The mythical July 12 tank battle at Prokhorovka is critically examined and placed in a proper context. This book also does an excellent job of placing the entire Kursk battle in its larger context. There is a wealth of appendices containing all possible statistical information, making it an indispensable tool for researchers and historians.

Demolishing the Myth: The Tank Battle at Prokhorovka, Kursk, July 1943

An Operational Narrative by Valeriy Zamulin ISBN-10: 1906033897, 2011, 672 pages
Written by a Russian historian, a local resident living near the site of event, Zamulin’s book is trying to rip off the decades of misinformation and to reveal heretofore unavailable detail about well-known battles like Kursk. The first three chapters, which consist of about 60 pages, provides an overview of the Battle of Kursk, the defensive preparations of the Voronezh Front and an overview of the 5th Guards Tank Army (5GTA) and its commander, Pavel Rotmistrov. The author gets into the Battle of Prokhorovka proper about one-third of the way through the book and is most likely to remain the best Soviet account of the battle for some time

Osprey Campaign Books – By Mark Healy ISBN-10: 1855322110, 2002, 96 pages
Mark Healy’s Book is a short and easy to read coverage of the campaign, with lots of photos, maps and diagrams, without going into much detail. I does however give the reader an insight into the battle, the participants and the outcome. A very good buy.

The Russian-German War 1943-1944 by Paul Carell ISBN 345-02213-0-165, 1966
This is a book which tells the German side of the story, although some Russian survivors’ tales have been included. It is one of the best books written on the war in Russia, describing the heat of battle in brilliant narrative and style. Personal stories of the men involved in this terrible carnage are gripping and live. A tale told to remember what war is like in real terms. Unfortunately only second hand buy available of this excellent book.

A study of the employment of armor in the Second World War by Major General F.F. von Mellenthin ISBN-10: 1862274592, 2009, 256 pages (first edition: 1956)
One of the best books written on the subject, presenting not only the story of Germany’s armor, but told by one of their foremost experts on armored warfare, which served as guidance to many officers and students how armor should be operated in battle. The author’s gripping description of his part in the Battle of Kursk is of prime interest, although it covers only the German side of the campaign, at the time no Russian version was available to the author, it is still an unbiased report. His maps are very good and clear to follow the narrative. An interesting part discusses armored tactics throughout Citadel, which is very helpful to explain the way German panzers fought in the Southern section of the campaign. A reprint is available from 2009.