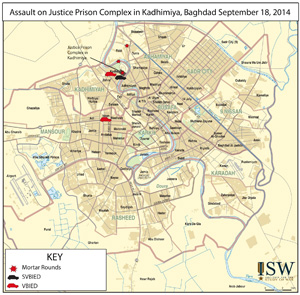 While its forces are facing growing pressure in the North, ISIS has increased its attacks on Baghdad last week, rippling mortar fires and suicide bombings at several targets in the Iraqi capital, in a move to relieve the pressure it is facing as a result of the recent U.S. air campaign targeting its positions, comments Ahmed Ali, the Iraq Team Lead at .

On September 18, the Islamic State of Iraq and al-Sham (ISIS) launched a complex attack likely targeting the Adala (Justice) Prison in Baghdad’s Kadhmiyah neighborhood in northern Baghdad, the ISW reports. The attack was intended to break into the prison but foiled, According to the Baghdad Operations Command. ISIS also launched another attack in Baghdad’s Iskan neighborhood that likely targeted the offices of the Iraqi Shi’a political group and militia, the Badr Organization. The attacks included employment of mortar fire, Vehicle-Borne Improvised Explosive Devices (VBIEDs), and Suicide Borne Improvised Explosive Devices (SVBIEDs). The mortars were likely launched from the areas of the northern Baghdad belt including Taji. The prison suffered 14 mortar bomb attacks, in addition to an SVBIED, resulting in the death of three people and injury of 10. Two attackers who had intended to attack the prison while wearing an explosive vest (SVEST) were arrested. Another VBIED exploded in a restaurant area in Kadhmiyah that resulted in the death of four people and the injury of 11 people. A third VBIED was defused by Iraqi police also in Kadhmiyah. Elsewhere in Baghdad, a VBIED detonated in the Iskan area in western Baghdad. The VBIED targeted the office of the Badr Organization, a Shi’a militia organization that has taken a leading role in directing Iraqi Shi’a militia operations to counter ISIS.

The government will want to maintain a strong defense of Baghdad by preserving the same posture. More likely, however, the attacks will trigger increased activities of Iraqi Shi’a militia in Baghdad in order to target ISIS sleeper cells and predominantly Iraqi Sunni areas including Adhamiyah, Ali comments.