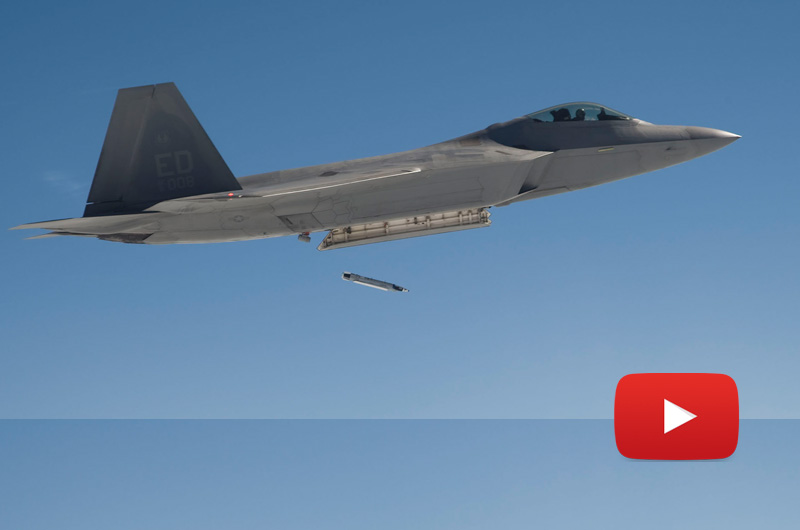 U.S. and partner nation forces have begun airstrikes inside Syria Monday Sept 22, 2014, targeting terrorists from the Islamic State of Iraq and the Levant (ISIL), Pentagon Press Secretary Navy Adm. The strikes are being undertaken through a mix of fighter and bomber aircraft, drones and Tomahawk Land Attack missiles. At present, Saudi Arabia, Jordan, the United Arab Emirates and Bahrain have agreed to become ‘full partners’ in support of the operation. Qatar also sent military aircraft to play a supporting role but did not carry out strikes. According to US sources, some of the Tomahawks were set to airburst modes,

The air strikes were organized in three waves. The first wave began around midnight in Syria, or 8:30 Eastern time, as two guided missile destroyers – USS Arleigh Burke in the Red Sea and the USS Philippine Sea in the northern Arabian Gulf – launched more than 40 Tomahawk cruise missiles against targets in Ar-Raqqah in eastern and Aleppo, in northern Syria. Most of the Tomahawk land-attack missile strikes were against Khorasan Group compounds, their manufacturing workshops and training camps.

The second wave consisted of F-22 Raptors in their first combat role, F-15 Strike Eagles, F-16s, B-1 bombers and drones that launched from bases in the region around 9:00 p.m. Eastern time against targets in northern Syria. The two waves were carried out exclusively by US forces. The strike was the first time the F-22 was used in a combat role, delivering GPS-guided precision attack munitions.

The final wave that occurred just after midnight included F-18s from the USS George H.W. Bush in the northern Arabian Gulf and regionally based U.S. and coalition partners. These fighter jets attacked targets in eastern Syria, including ISIL training camps and combat vehicles near Dayr az-Zawr.

“Our immediate tasks are to continue the degradation of ISIL in Syria and Iraq [and] to build and strengthen regional partners and to build a regional coalition.” said Army Lt. Gen. William C. Mayville Jr., director of operations for the Joint Staff, Other immediate tasks, Mayville said, are to help place Iraqi security forces and Peshmerga forces on the offensive, to support broader diplomatic efforts in the region, to implement a Syrian train-and-equip program, and to continue working with Iraqi security forces and ministries.

Coalition partners in the strikes included Jordan, the United Arab Emirates, Bahrain and Saudi Arabia, with Qatar in a supporting role, the admiral said during a press briefing here, adding that all continue to be a critical part of the strategy against ISIL.

The Washington Post reported that residents of the northeastern Syrian city of Raqqah — the Islamic State’s self-declared capital — reported news of large explosions on Twitter and said repeated passes from military aircraft were clearly audible. US officials said the airstrikes and cruise missiles “destroyed or damaged” ISIL targets spread across Syria near the towns of Ar Raqqah, Dayr az Zawr, Al Hasakah, and Abu Kamal. On a separate strike US forces executed unilateral precision strikes against the Khorasan group, an [al-Qaida]-affiliated terrorist organization located in northwest Syria, General Kirby added. Intelligence reports indicated the Khorasan Group was in the final stages of plans to execute major attacks against Western targets and potentially the United States. “We’ve been watching this group closely for some time.” Pentagon Press Secretary Navy Adm. John Kirby explained, “We know that the Khorasan group has attempted to recruit Westerners to serve as operatives or to infiltrate back into their homelands,… The Khorasan group is clearly not focused on the Assad regime or the Syrian people. They are establishing roots in Syria … to advance attacks against the West and the homeland.” US intelligence believes that a senior Al-Qaeda Operative Muhsin Al-Fadhli has been killed in this strike.

The United States was planning to attack as many as 20 Islamic State targets in the operation, which would mark the biggest single day of attacks since the military began striking the jihadist group in Iraq on Aug. 8, 2014. Among those targets were buildings occupied by Islamic State leaders, training sites, armed vehicles, supply lines, arsenals and a finance center.

In previous days U.S. Central Command has conducted a total of 190 airstrikes across Iraq in the battle against ISIL forces. The decision to begin the airstrikes in Syria was made earlier on Monday by Centcom Commander Army Gen. Lloyd Austin. The strikes are being made under authorization granted by the commander in chief, President Barack Obama, as part of the comprehensive strategy to degrade and ultimately destroy ISIL.

The Pentagon plans to send a dozen A-10 Thunderbolt aircraft and up to 300 airmen to the Middle East in early October, to help in the conflict against the Islamic State group, the Indiana National Guard said.

The jihadist movement — which the CIA estimates has up to 31,000 fighters at its disposal — controls much of eastern Syria and has used its bases there as a springboard for seizing territory in neighbouring Iraq.

The coalition air operations over Syria are not coordinated with the Syrian air force, and are therefore considered operations in contested airspace. Moreover, the Syrian air force continues to attack rebel positions and concentrations, primarily in the west. Thus far, there is no indication that Syrian air defenses responded to the U.S. warplanes flying inside Syrian air space. Syria has one of the most formidable air defense networks in the region. However, most of the surface-to-air missile systems are located near Damascus. In 2012, the Syrian military shot down a Turkish RF-4E reconnaissance jet flying over Syrian airspace.

Syrian air force has also been operating in the South-Western front with Israel, along the Golan Heights. In recent weeks Syrian air strikes were directed against Jihadist group Jabhat al-Nusra, which virtually took over the area along the Syria-Israel border. Two weeks ago Israel shot down a Syrian UAV that penetrated the Israeli airspace in the Golan. Today, a Syrian fighter jet was shot down over that area — the first such downing in decades. Both UAV and fighter jet were intercepted by Israeli Patriot missiles. According to Israeli sources the Syrian Sukhoi Su-24 penetrated 800 meters into the Israeli area, and tried to return to Syrian airspace after the Patriot was shot at it.

Syrian air attacks in the northern city of Idlib killed at least 42 civilians, the Lebanese Daily Star reported an anti-regime group of activists said. The attacks hit territory in and around the towns of Saraqeb and Ehsim in Idlib province Sunday, the Britain-based Syrian Observatory for Human Rights said. One struck an area outside Saraqeb where people who had fled earlier assaults on the town itself were taking shelter, the Observatory said. One activist in Saraqeb said people had been fleeing to nearby farmland to escape the bombardment, but Sunday warplanes also struck the farms which had been “packed with families… This is what led to the high number of deaths,” the activist said.

Other attacks by the Syrian Air Force were carried out in the Damascus suburb of Hammourieh killed nine people.