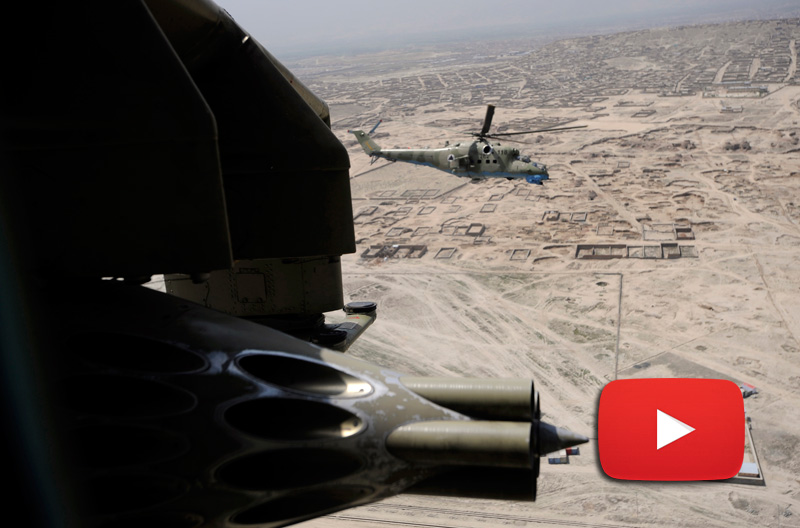 The draw down of coalition forces continues, from the current 40,000 troops to 12.5 by the end of this year. The majority of the remaining force will be US – about 9,800, with the remaining 2,700 include small units from a number of coalition partners.

The draw down has also reduced the number of combat outposts manned and operated by the coalition from 300 to under 30. By January 1, 2015 the remaining coalition forces will be deployed in  a pattern of spoke and hub, focused on three sites in the East of Afghanistan – Jalalabad, Gamberi and Bagram. Coalition forces will also remain in Mazar-e-Sharif in the North of the country, Herat in the West and Kandahar in the South.

Most of these sites are providing operating bases for Coalition and Afghan air power – unmanned aviation, as well as Afghan helicopters and soon to arrive light close air support fighters. T he Afghan air force and the special mission wing, that support the Afghan special operating forces. 84 Mi-17s helicopters are currently providing the mainstay of the Afghan Air Force. According to Campbell, three additional helicopters will complete the fleet of 87 helicopters.  “We’ll work very hard on their aviation, on their intelligence, on their sustainment, those things that are very, very hard for any army, especially hard here in Afghanistan.” Campbell said.

“These Mi-17s have been a force multiplier for the special operating forces.” he added, “for the conventional forces, the army and the police, they’ve been mostly moving forces and then providing resupply; equipped with electro-optical payloads to assist night flying and Intelligence, Surveillance and Reconnaissance missions in addition to assault and fire support for special operations… The issues that we work with on the Mi-17 is making sure we continue to keep in the in the pipeline and then work on the maintenance piece.” Campbell added, raising concern about the availability of spare parts and logistics supplies that could be caused by the ban the US Congress imposed on the Russian defense export conglomerate Rosoboronexport.

The Afghan Air Force also operates 11 Mi-35 attack helicopters designed to be the primary close air support asset for the Afghan National Army, when the coalition forces withdraw from the country. However, these helicopters are based on relatively old airframes that will begin to phase out of service by 2016.

The first of those Light Air Support (LAS) – the first of 20 US built A-29 Super Tucano light air support aircraft the Pentagon is planning to send to Afghanistan rolled-out from Sierra Nevada Corporation/Embraer assembly plant in Jacksonville, FL last month.  “This delivery represents the birth of an important capability for Afghanistan” said  U.S. Air Force Brigadier General Eric Fick. the first aircraft will be delivered to  Moody Air Force Base, to provide the basis for the Afghan  Air Advisor Training corps.  The aircraft will be used to provide light air support, reconnaissance and training capabilities to the Afghanistan military.

“Specifically the mission that we are going to replace is the Mi-35 Helicopter, which is an attack helicopter, so they cover some of the same missions,” Hogan said. “But really this aircraft is a monumental leap in capabilities for the Afghan Air Force. It will allow us to do some overlap of those [Mi-35] missions and will do a lot better; it will also expand some other missions, which they currently cannot execute. “Right now we do not have any type of aircraft that can guard the troops and provide the support. Thank you to everyone that has worked this program. And our friendship will continue to grow and be strong into the future.” Afghan Air Force Maj. Gen. Abdul Wahab Wardak, Afghan Air Force commander said.

The Super Tucano is a light air support turboprop aircraft with advanced training capabilities currently used by nine air forces in Africa, Asia Pacific and Latin America. In the past 10 years of operation the 170 Super Tucanos delivered by Embraer have recorded 31,000 combat hours and 230,000 flight hours. gained an excellent performance record: over 230,000 flight hours and 31,000 combat hours. The company has  received more than 210 firm orders for the aircraft.

The first of 20 A-29 Super Tucano aircraft arrived at Moody AFB Sept. 26, 2014. The A-29 is a light air support training aircraft that will be used to train 30 Afghan pilots and 90 Afghan maintainers as part of a requirement from the International Security Assistance Force to conduct training outside of Afghanistan.

Helicopter pilots are trained on 17 light helicopters delivered by the USA since 2012. In September 2014 MD Helicopter was awarded a follow-on order for twelve (12) MD 530F additional helicopters – six will be delivered in 2015. Since the first MD helicopters arrived in Shindand in 2011, Afghan pilots have logged more than 5,700 hours flying the MD 530F in the performance of initial entry rotary wing training. Designed for easy modification in response to changing threat levels, these aircraft will be reconfigured to operate the weapon systems necessary to deliver mission-specific light attack capabilities.

The conversion of those ‘Little Birds’ to armed reconnaissance missions will be done under a separate $44 million contract awarded to MD Helicopters last week, to develop and provide an armament package for the 17 MD-530F helicopters that were already supplied to the Afghan Air Force. The ‘F’ variant of the MD-530F has been modified to function in the ‘hot and high’ environment of Afghanistan, in that it has a more powerful engine (compared with the MD 500E) and longer main and tail rotor blades. The helicopters were delivered under a support package including up to 54 helicopters, approved in 2011.