Bell unveiled here a full-scale model of its V-280 Valor, the next generation in tiltrotor aircraft the US Army is considering as a future UH-60 Black Hawk replacement for the 2030. Larger than the current UH-60 Black Hawk, but smaller than the V-22 Osprey Bell and Boeing have supplied the Marine Corps and SOCOM, V-280 represents a third-generation tiltrotor aircraft designed for the Joint Multi-Role demonstrator and Future Vertical Lift programs.

Unlike the V-22, where the entire engine and rotor are rotated up for takeoff, landing and hovering, the V-280 is designed with rotating rotors, maintaining the two engines in fixed positions on the win tips.

The V-280 Valor will be able to fly twice the range of current helicopters, cruising at 280 knots it will cover a combat range of 500 to 800 nautical miles, enabling ground forces to control much larger areas of operation. The V-280 will be able to fly 14 troop transport missions, medical evacuation, carry supplies and deliver loads more effectively using two sling loads and large six-foot wide doors.

Bell has gathered a team to build and fly test the Valor demonstrator. The company is in the detailed design phase of the V-280’s development, and the aircraft is expected to be ready for flight testing in September 2017. 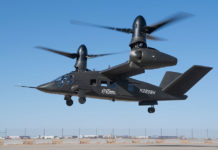