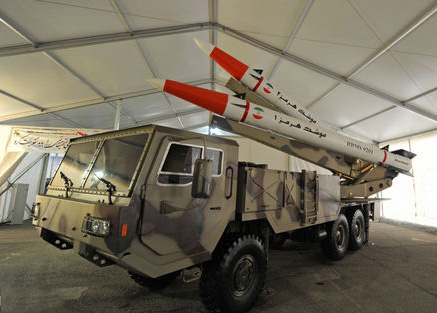 By the early 1990s the Chinese design evolved into the indigenously developed Zelzal II, under a joint program with Syria. The rocket’s 610mm diameter determined the new designation for the weapon – M600. Using larger propellant tank, the missile’s range was extended to 250km, but at these ranges, its course deviation would render the weapon useless attacking ground targets with any military significance.

Fateh 110 was designed to rectify this problem and turn the free-flight rocket into a ballistic missile that would improve its precision even at maximum range. The missile was fitted with an inertial guidance system (INS) and guidance system controlling four canards correcting the missiles’ trajectory, by nulling deviations caused by atmospheric conditions (wind, pressure) and propulsion irregularities. The missile was first tested in 2010, reached a distance of 200 km carrying a warhead of 650 kg.

A fourth generation of the Fateh-110 was tested in 2012, demonstrating increased range (300km), increased payload (650 kg) improved precision and shorter reaction time. These missiles are now available with unitary warhead or cargo bay carrying up to 30 subminutions, each weighing 17 kg.

Iran and Syria attempted several times to supply the the Iranian supported, Lebanese Hezbollah group with the missiles, some of those shipments were struck by Israel Air Force attacks. However, apparently some deliveries reached their destinations, as in November 2014 Hezbollah announced it has in its possession guided missiles with adequate precision and range to attack any target in Israel.

In the past Israel’s intelligence uncovered those ‘semi strategic’ threats – in 2006 these were the Zelzal 2 missiles delivered from Iran. All those missiles were destroyed during the first hours of the 2006 Second Lebanon War, as part of Israel’s retaliatory attack after the killing of four and abduction of two soldiers by Hezbollah on the Israel-Lebanon border. Since then it was reported that Hezbollah received several dozens of Scud D missiles from Syria, but, as liquid-propelled missiles, their operation would bee too slow, enabling the Israelis to strike them before they are launched.

Deliveries of advanced, precise solid-propelled missiles has been regarded by Israel as a ‘red line’, triggering preemptive response. In 2013 the Israel Air Force attacked a shipment of similar missiles near the airport in Damascus. In the past year, Israel is said to have attacked six missile-laden convoys, as well as missile storage sites, both in Syria and Lebanon, in a bid to prevent Syria from delivering ballistic missiles, anti-ship and anti-aircraft to Hezbollah.