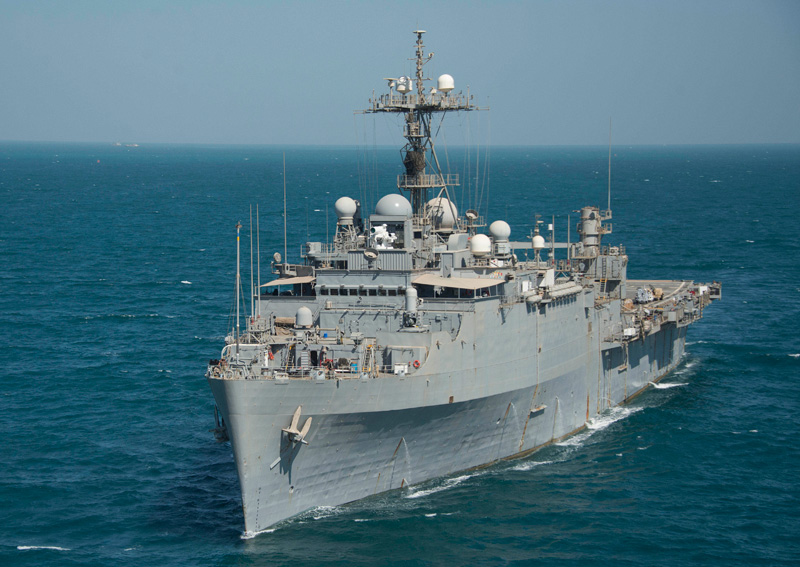 The US Navy has been operating a High Energy Laser (HEL) weapon in the Persian Gulf and Arabian Sea since the summer of 2014. The system, afloat on the forward staging base (interim) – USS Ponce (AFSB(I) 15) is the first laser weapon system operationally deployed by the US military. Currently at a prototype stage, the system has been fielded to evaluate the capabilities of Solid State Laser-(SSL) in a Quick Reaction Capability (QRC) demonstration.

According to navy plans HEL will equip U.S. ships with a high depth-of-fire delivered at the speed of light, with seconds dwell time and a deep magazine for more powerful means of self-defense.

The SSL prototype is a 30 kW-class solid-state laser weapon system developed under the leadership of the Naval Sea Systems Command (NAVSEA). The system integrates six commercial 5.4 kW fibre lasers with a beam combiner developed for the Naval Research Laboratory. Final integration and testing of the system were performed at the Naval Surface Warfare Center Dahlgren Division, with land-based testing performed on the Potomac River Test Range.

The US Navy is exploring several directed energy and laser weapon programs for its current and future force. Future HEL weapons delivering peak power of 100-150 kW are considered as cost effective means for protection against anti-ship missiles, guided weapons and swarms of fast attack boats. In particular, the service is attracted by the low cost-per-shot offered by the laser, particularly on electrically powered vessels such as the new DDG-1000 (USS Zumwalt), for which powerful free electron lasers are being developed.

Different laser weapons would be compatible with existing vessels such as the Littoral Combat Ships (LCS) and DDG-51 guided missile destroyers. These lasers currently evaluated by the Office of Naval Research are expected to be available for testing at sea by 2016.

A miniaturized version of the HEL Weapon System or HELWS is a high energy fiber laser, evaluated by ONR to equip naval helicopters. The Concept of Employment for a HELWS, is to operate the airborne laser from a rotary wing platforms such as the MH-60 or MQ-8C unmanned helicopter, enabling the platform to engage light targets such as fast swarms of boats, unmanned surface vehicles or anti-aircraft missiles. The concept of operation, as in operating lasers on surface vessels, will be to employ the lasers against low-end asymmetric threats, thus free the limited load-out of the vessel’s advanced kinetic weapons to strike advanced high-end threats.