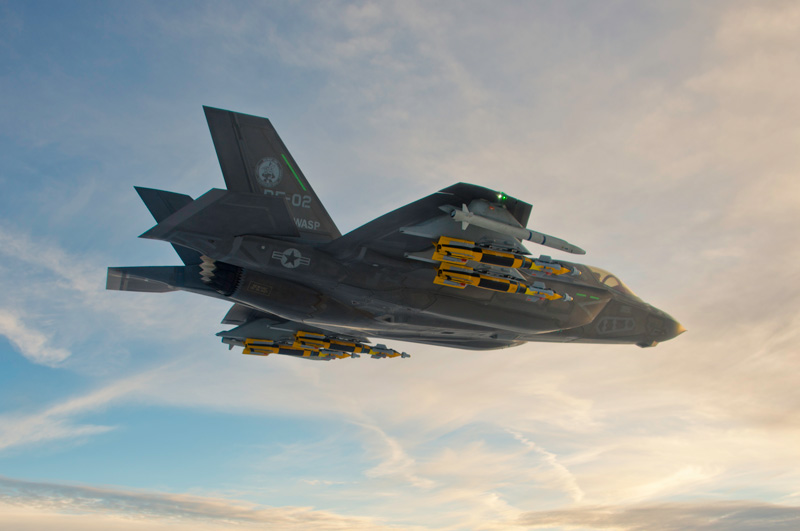 The test used ‘dummy’ weapons rounds, which are identical in fit and form to the operational weapons. The aircraft loaded with the weapons were tested on the STOVL aircraft. The initial tests are an important step in integrating weapons onto the F-35B, allowing test pilots to understand how they affect the way the aircraft performs and handles.

The next stage of weapons testing is due to begin early in 2015 and to involve weapon separation,followed by guided releases of both ASRAAM and Paveway IV.

The UK’s Royal Air Force (RAF) already uses ASRAAM and Paveway IV on the Eurofighter Typhoon and Panavia Tornado GR4. The successful tests are a step towards full interoperability between the current and future fast jets that will be used by the RAF and the UK’s Royal Navy from 2018.

Earlier this week the British Ministry of Defence (MOD) signed a contract for the first production batch of four Lightning II stealth combat aircraft, which will operate from both the Royal Navy’s new aircraft carriers and RAF land bases. The contract for the F-35B aircraft forms part of the MOD’s investment in Lightning II over the next five years to procure an initial 14 of these multi-role fifth-generation aircraft, as well as putting in place the necessary support arrangements and infrastructure.

Further contracts will cover the procurement of a range of equipment, including engines. Bernard Gray, the MOD’s Chief of Defence Materiel, confirmed that “the MOD remains on target for achieving both operational capability from land bases and the start of flying trials aboard the carrier HMS Queen Elizabeth in 2018 for this highly-advanced multi-role stealth combat aircraft.” The agreement is part of the 43 aircraft Low Rate Initial Production Block VIII contract awarded by the Joint Strike Fighter Program Office (JPO) last week.

The ASRAAM air/air missile developed and produced by MBDA is in service with the Royal Air Force on their Typhoon and Tornado aircraft. The weapon is also in service with the Royal Australian Air Force on their F/A-18 Hornet. ASRAAM is a Within Visual Range (WVR) Dominance weapon and is guided by a passive-imaging infra-red sensor. The missile can be cued by aircraft sensors, such as the radar or helmet mounted-display, but can also act as an autonomous infra-red search and track system. Supporting Lock On After Launch (LOAL) capability allows the the missile to be fired from the internal weapons bay of the F-35, by acquiring the target designated by the pilot on the radar or helmet display, without the missile’s seeker having to ‘see’ the target prior to launch. Its large rocket motor provides high-speed interception and this, coupled with its accurate-imaging infra-red guidance system and highly effective warhead, ensure high kill probability against any target.