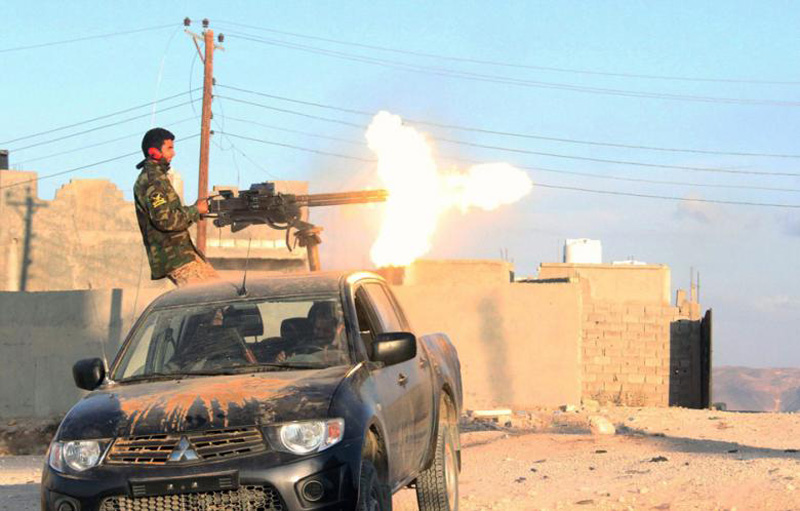 Libya and its ongoing battle between Islamists and non-Islamist forces presents a nearby breeding ground for ISIS. Egypt’s President Abdel Fattah al-Sisi is facing one of his biggest foreign policy problems with the Libyan civil war.

The Egyptian leader is convinced, that Egypt’s struggle against radical Islamic forces is not limited to Sinai, or even robbing bands of Islamists from the Muslim Brotherhood inside the homeland. His main concern, threatening Egypt comes from the growing potential building up on his western frontier, Libya, or rather the coastal region of Cyrenaica, which in modern military terms is only a stone throw away from the Egyptian border.

It is because of this threat, that leads Sisi from committing substantial military power into the active US sponsored fight against ISIS, although, this radical faction provides Egypt’s foremost threat. By reactivating the Muslim Brotherhood, or even more extremist Islamic forces could try and topple Sisi’s rule, or hamper his ongoing effort to re-stabilize Egypt’s failing Economy. The danger is acute, and imminent.

And this threat is already building up. At the rally held in Derna earlier this month, Ansar al Shariah’s commanders declared their full allegiance to ISIS in Eastern Lybia. This is the same group which is responsible for most brutal acts, killing the US Ambassador in Bengazi in 2012 and also blamed by Egyptian military intelligence for a cross-border raid last summer against an Egyptian army post resulting in the murder of 22 Egyptian soldiers.

Probably the biggest coup for ISIS has so far happened in the coastal town of Derna, Libya, where ISIS has simply taken over the town of 100,000 people. Fighters returning from Syria and Iraq formed the muscle behind this coup.

Now the Libyan branch of ISIS has a tight grip on the city, controlling the courts, all aspects of administration, education, and the local radio. “Derna today already looks identical to Raqqa, the ISIS headquarters town in Syria. Videos of militants in Derna brandishing the ISIS flag have also surfaced on the Internet.

UN Envoy for Libya Bernardino Leon said that “the self-proclaimed Islamic State organization (Da’ish) is already operating in Libya, which is plagued by violence. The return to Libya of up to 300 Libyan jihadists who were part of ISIS’ al Battar Brigade ñ deployed at first in Deir Ezzor in Syria and then Mosul in Iraq. These Libyans who had fought in Syria and Iraq are now back in their country, and the present chaos is the ideal condition for their establishment.”

Libya has become a hotbed for extremism – a threat that could persuade Egypt to take a more active stance in the broader war on terror.

ISIS’s actions toward the Gulf could push Egypt to pursue military action as well. Recent reports indicate ISIS having established an Islamic controlled enclave at the border town of Derna, in Cyrenaica, the eastern coastal region of Libya, close to the Egyptian border. Two months ago ISIS leader Baghdadi helped orchestrate the take-over of Derna by dispatching one of his senior aides, Abu Nabil al Anbari, an Iraqi ISIS veteran who had spent time with Baghdadi.

Libya has been a threat to Egypt since the Qaddafi regime was toppled, particularly due to the country’s 1,115 km long, porous and unsecured borders with the Nile country. These borders now allow for an unencumbered flow of fighters and weapons, which eventually reach the Sinai Peninsula and contribute to the already highly unstable situation. ISIS is already planning links between militants in both Libya and Egypt, saying Libyan-based Egyptian militants dream of creating an ISIS-style empire in their homeland.