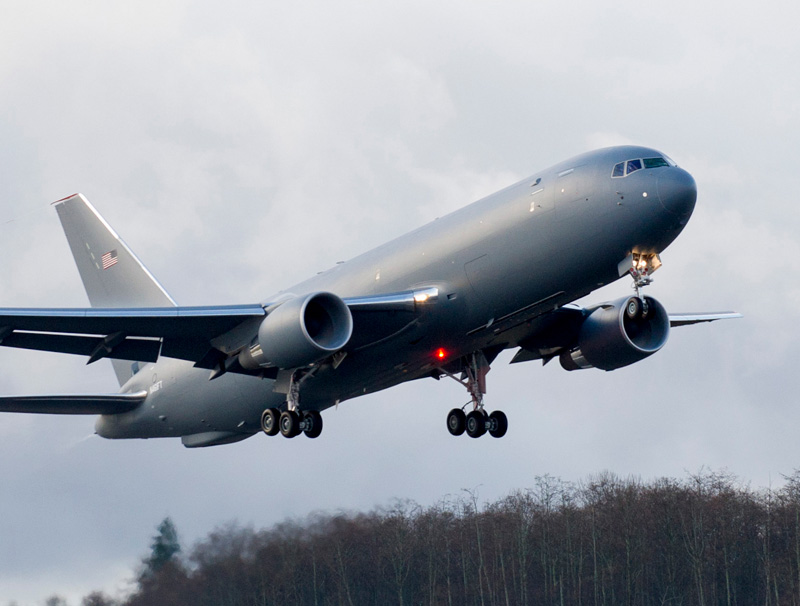 Boeing and the U.S. Air Force successfully completed the first flight of the KC-46 tanker test program Sunday 28 December 2014. The plane, a Boeing 767-2C, took off from Paine Field, Wash., at 9:29 a.m. (PST) and landed three hours and 32 minutes later at Boeing Field. The first two 767-2Cs enter flight test as commercial freighters prior to receiving their aerial refuelling systems, while the KC-46s will fly as fully equipped tankers through the FAA and military certification process.

This ‘Pegasus’, as the KC-46 is now designated by the Air Force, is designed to be the first Engineering, Manufacturing and Development (EMD) aircraft which will receive its military systems following certification. The 767-2C freighter is the initial step toward producing a KC-46. The aircraft will undergo additional finishing work s at the Boeing facility such as installing the refuelling boom and other military specific equipment. The first flight of a KC-46 (EMD #2) is expected in the Spring of 2015.

The Air Force contracted with Boeing in February 2011 to acquire 179 KC-46 refuelling tankers to begin recapitalizing the aging tanker fleet. As part of a contract awarded in 2011 to design and develop the Air Force’s next-generation tanker aircraft, Boeing is building four test aircraft – two 767-2Cs and two KC-46A Tankers. One of the program’s milestones is the first unit initial operational capability, requiring 18 KC-46 aircraft and all necessary support equipment to be on the ramp, ready to support warfighter needs, by the August 2017 timeframe.