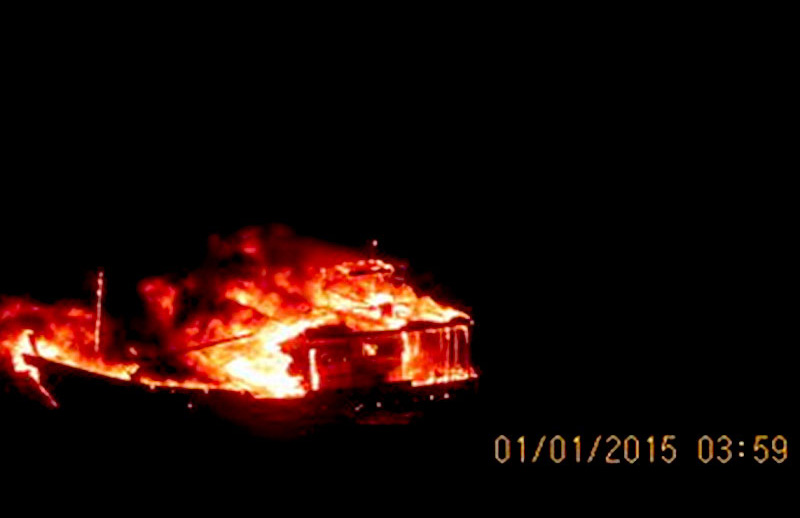 An explosives-laden Pakistani trawler blew itself up late on December 31 night after being intercepted by the Indian Coast Guard in the Arabian Sea off Porbandar, Gujarat.

The boat stopped after the coast guard fired shots but the four-man crew had by then set it on fire, triggering a major explosion and sinking the trawler, a defence ministry spokesperson said.

Indian Security agencies have been on high alert on the high seas following intelligence inputs on an increased terror threat from the sea. A specific intelligence alert issued on Wednesday reported on fishing boat sailing from Keti Bunder near Karachi, planning some kind of an operation in the Arabian Sea.

Based on that input the Coast Guard launched an Do 228 aerial patrol that located the fishing boat. It then directed coast guard boats patrolling in the area to intercept the suspected target approximately 365 km from the port of Porbander, leading to first contact around midnight of December 31.

“The Coast Guard warned the boat to stop but it increased speed and tried to run away. After being stopped, the four persons on board the boat blew themselves up. The boat sank at the spot. Search operations are still in progress” defense ministry sources told Times of India.

The Indian Navy and Coast Guards are on high alert since the terrorist attempt to hijack Pakistani Navy Ship PNS Zulfiqar on September 6. The terrorists planned to use the vessel use to attack US warships in the Indian Ocean. The raid at a naval base in Karachi was allegedly carried out with the help of Pakistani naval personnel, heightening fears of terrorist infiltration into the Pakistan military.

The recent incident comes six years after the 26/11 attack on Mumbai, when 10 terrorists travelled from Karachi in a boat, hijacked an Indian fishing vessel and steered it to Mumbai to go on a three-day rampage during which they killed 166 people.

Innocent looking fishing boats are often used by terrorists as transportation means prior to attacks on larger targets. Another terrorist attack involving fishing boats happened on November 12, 2014 in the Eastern Mediterranean sea, where four fishing boats attacked an Egyptian Navy vessel at sea, about 70 km off the northern port of Damietta. Air Force fighters were called in to assist and sunk the fishing boats. The naval vessel reportedly caught fire in the assault. Five crewmen were wounded and eight were missing following the attack. Some reports claimed the attack could be a terrorist attempt to hit Israeli vessels or offshore facilities off the Israeli coast.

The most famous attack was the bombing of USS Cole. In October 2000, suicide bombers exploded a small boat alongside the US Navy destroyer in the Yemeni port of Aden, killing 17 American sailors and injuring another 39.