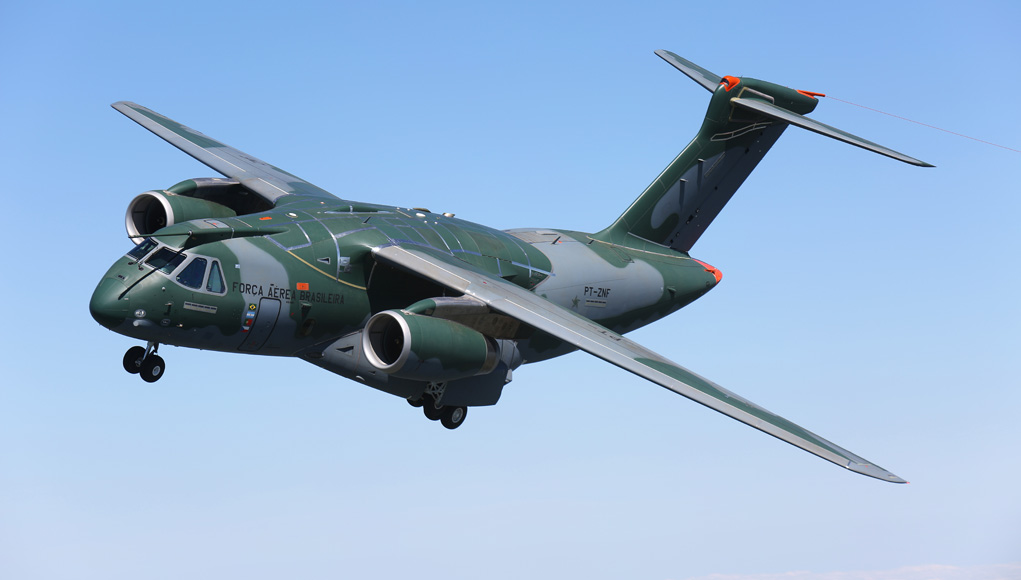 Embraer today successfully performed the first flight of the new military transport and aerial refueling jet, the KC-390. Having benefited from an advanced campaign of simulations and extensive ground tests, the KC-390 crew spent 1 hour 25 minutes airborne on the first flight, performing maneuvers to evaluate its flight characteristics and test systems on board. “The KC-390 behaved in a docile and predictable manner,” said Captain Mozart Louzada.”The advanced fly-by-wire flight control system and the latest-generation avionics make flying easy and render a smooth and precise flight.” According to the original schedule (of 2009) the KC-390 was planned to begin flight testing last year and delivered to the Brazilian Air Force in 2015. Due to the delay, the first customer will receive the aircraft in 2016.

“The program continues to move forward as planned and the KC-390 has drawn interest from several countries around the world”, said Jackson Schneider, President and CEO of Embraer Defense & Security. “We are proud to once again keep our commitments in the development of this aircraft, which will set a new standard in the category of tactical military transport.”

“The KC-390 will be the backbone of transport aviation for the Brazilian Air Force.”

The KC-390 is a joint project of the Brazilian Air Force and Embraer to develop and produce a tactical military transport and air-to-air refueling plane that represents a significant advance in terms of technology and innovation for the Brazilian aeronautics industry. This is an aircraft designed to set new standards in its class, at a lower operational cost and with flexibility to perform a wide range of missions: transport and airdropping of cargo and troops, aerial refueling, search and rescue, and forest fire response, among others.

On May 20, 2014, Embraer and the Brazilian Air Force signed the serial production contract for the delivery of 28 KC-390 aircraft and initial logistic support. Besides the order from the Brazilian Air Force, there are current purchase intentions from other countries, including Colombia (12), Argentina (6), Chile (6), Portugal (6) and the Czech Republic (2) – for a total of 32 additional aircraft. Sweden is also a prospect, following a proposal submitted in 2010 to buy the KC-390 if Brazil would choose the Gripen for its next generation jet fighter. Embraer and Boeing have also entered into a cooperative agreement, to market and support the Brazilian aircraft in the US market and a number of international territories, including the UK and parts of the Middle East.

“The KC-390 will be the backbone of transport aviation for the Brazilian Air Force. From the Amazon to Antarctica, the fleet of 28 aircraft will play a key role in the diversity of projects of the Brazilian State, from scientific research to the maintenance of sovereignty”, said Aeronautics Commander, Lieutenant-Brigadier General Nivaldo Luiz Rossato.

“This first flight is a fundamental step toward accomplishing the task with which we were entrusted. The KC-390 is the result of a close cooperation with the Brazilian Air Force and international partners, representing what is most likely the greatest technological challenge that the Company has ever encountered in its history. We are profoundly moved for having achieved this key milestone”, said Frederico Fleury Curado, President and CEO of Embraer. The crew on the first flight included Captain Louzada, co-pilot Marcos Salgado de Oliveira Lima and flight test engineers Raphael Lima and Roberto Becker.