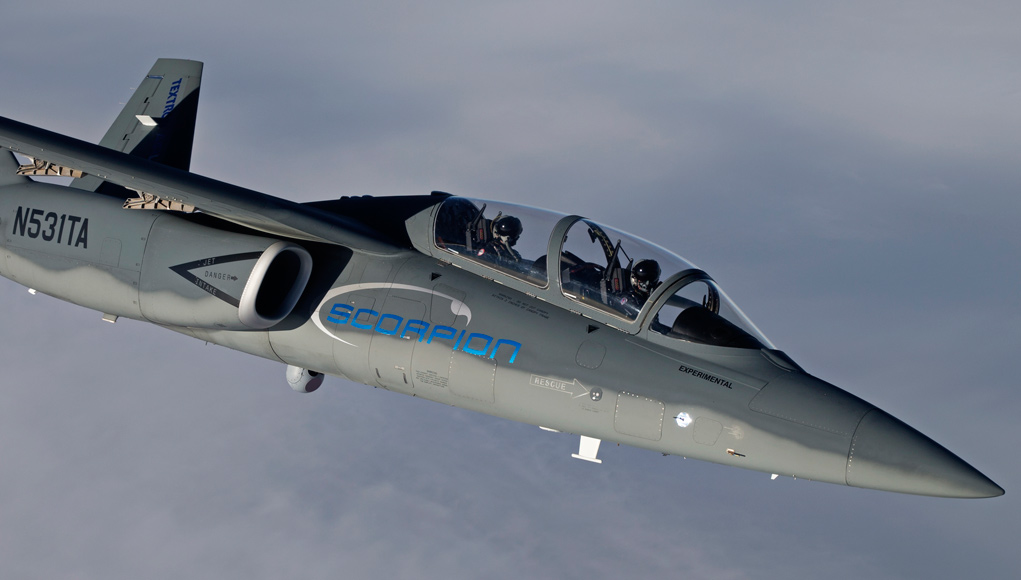 The Scorpion reconnaissance and attack aircraft displayed at the Paris Air Show this week is currently on its second European tour, visiting mainland Europe and the UK. Following this week the aircraft will perform demonstration flights as the guest of several European air forces, before arriving at the Royal International Air Tattoo in Fairford, UK, from July 17 to 19. Textron AirLand’s Scorpion was introduced in 2013 and has completed more than 400 hours of flight-testing with an exceptionally high mission availability score.

Textron is aiming its new jet at countries that require extensive intelligence, surveillance and reconnaissance (ISR) operations, but these missions are often carried out by non-military operators (such as certain Middle-Eastern countries that have strong national guards or internal security agencies). These operators are currently employing various ISR assets based on business aircraft and are interested in expanding their capabilities with some ‘kinetic’ effects. “We offer an operational ISR capability at the acquisition and life-cycle costs of a business aircraft,” said Ron Parker, flight test engineer in the program. According to Parker, Textron is currently producing the second Scorpion, which will be the aircraft that will undergo flight certification. It will be different from the current prototype, built as an experimental plane.

Although its price tag is relatively low, the Scorpion features advanced capabilities, including twin-engine power, two-seat operation, large internal payload capacity, high-definition ISR cameras, wing-mounted weapons stations, and modern avionics within an all-composite structure. According to Parker, with the ability to get to an escalating situation quickly – yet maneuvering at much lower speeds, Scorpion brings the ability to see and exploit perishable intelligence and strike fleeting targets, bringing tactical advantage to demanding situations.

Textron offers the Scorpion at a cost below $20 million per aircraft, and at a flight-hour cost of $3,000 – about 10 – 20 percent of the acquisition and operating costs of modern combat aircraft or advanced trainers. The aircraft has demonstrated high reliability and rapid ground turnaround between missions, down to 15-20 minutes at times.