Turkish fighter jets have struck Kurdistan Workers’ Party (PKK) and Islamic State (ISIS) targets in Syria and Iraq yesterday. This action was followed by the detention of hundreds of suspected Kurdish militants, in a coordinated crackdown, as Ankara deployed military force for the first time against the terrorist group.

Official Turkish sources confirmed Turkish F-16 warplanes based in Diyarbakır, Incirlik and Adana had attacked five bases of the in Iraq and two ISIS targets in the towns of Hatay and Kilis in Syria as part of the operation.

The main strike force that numbered 20 F-16s struck PKK positions in northern Iraq. The PKK has been fighting against Turkey for more than three decades but in recent months have obeyed to a truce with Ankara. The leadership of Iraq’s Kurdish Regional Government (KRG) has condemned Turkish air strikes against positions of Kurdish fighters in its autonomous region, echoing the remarks of the leadership earlier.

In the operation, five PKK camps were attacked: Zap, Basyan, Gare, Avashin and Metina in Northern Iraq. The Turkish air force said that PKK’s training facilities, shelters and anti-aircraft batteries were targeted in the five camps. PKK’s headquarters located on Qandil Mountains in Northern Iraq were reportedly targeted in the attacks as well.

In a coordinated move, Turkish police have been rounding up hundreds of suspected Kurdish fighters in cities and towns across the country, detaining nearly 600 people. Turkish police fired water cannon and teargas to disperse about 1,000 demonstrators who had gathered in the capital Ankara to protest against military strikes in Syria and northern Iraq.

The strike Targets attacked included what was described as the group’s headquarters and an assembly point. While the airstrikes were launched, Turkish heavy artillery located in the border province of Kilis fired at ISIS positions in Syria.

Turkey is also to allow the US-led coalition to use its Incirlik airbase and other bases in the south of the country to conduct strikes against Isis. According to media sources allied combat missions from the base could begin in August. Additional airbases in the nearby cities of Diyarbakır and Batman will be opened to allied planes for emergencies. Coalition air forces that have been ongoing for almost a year are operating from bases in Cyprus and the Persian Gulf, because until now Turkey has refused to authorise offensive operations from its bases against its neighbours. Apparently, the devastating ISIS linked suicide attacks and PKK-linked assassinations of Turkish policemen last week have changed Ankara’s attitude.

The US military flatly denied reports in the Turkish media that the deal with the US included the establishment of a no-fly zone in northern Syria, a longstanding demand of the Turkish government which the US had resisted.

Turkey has also been planning to create a buffer zone in Syria, along its border with Syria, where it planned to settle the Syrian refugees that have fled across the border since the beginning of the Syrian Civil War but the coalition partners have objected such move.

The Turkish move could also be a sign of Ankara’s resentment of the U.S. resorted backing for the PKK-affiliated People’s Protection Units (YPG), the Kurdish fighters group operating against ISIS inside northern Syria.

“The conclusion of an agreement between Turkey and the U.S.-led anti-ISIS coalition to open Turkish airbases for coalition aircraft conducting sorties against the Islamic State of Iraq and al-Sham (ISIS) marks a major shift in Turkish policy which will provide immediate boost to U.S. efforts to degrade and ultimately defeat ISIS.” Christopher Kozak wrote in understandingwar.org.

Turkey’s decision to escalate against both militant groups suggests that Turkey intends to leverage the coalition’s calls for further action against ISIS in order to assert its own strategic interest in limiting the expansion of armed Kurdish groups along the Turkish border.

The government of Turkish President Recep Erdogan may also seek to utilize these security threats to increase its own political standing amidst ongoing negotiations to form a coalition government and a potential call for early elections. Over the near-term Turkey will face an expanded domestic threat from both ISIS and PKK militancy in the form of persistent violence against the Turkish state.

Nonetheless, a sustained Turkish effort against ISIS’s networks in Turkey and northern Syria combined with the efforts of local anti-ISIS Syrian opposition forces has the potential to significantly disrupt the foreign fighter flows which provide ISIS with a key source of reinforcements, suicide bombers, and legitimacy as a global caliphate. 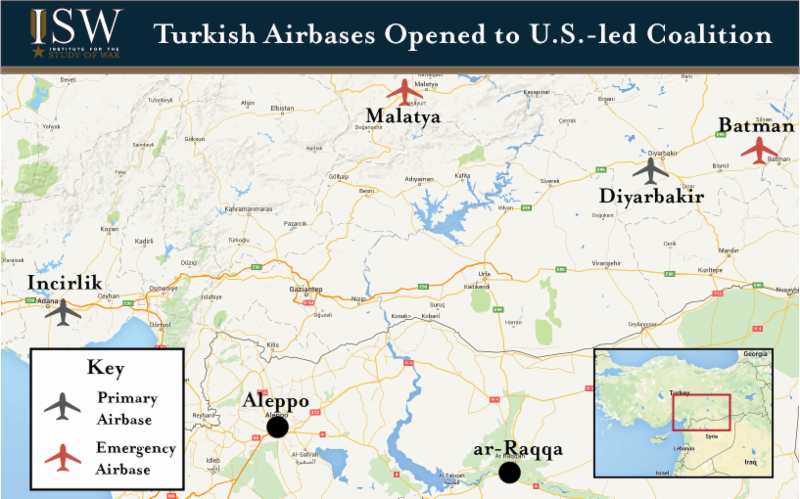