One of the orders, received from a NATO member European country, calls for the supply of C-MUSIC systems for an unspecified platform. “This new contract with the European NATO member country extends the number of platforms that will be equipped with our systems. We see a growing global demand for our DIRCM systems, which we believe address a strategic need for our customers”. Elad Aharonson, General Manager of Elbit Systems ISTAR Division commented.

C-MUSIC was developed by Elbit Systems as a podded version of the DIRCM, that can be installed or dismounted from an aircraft on demand. The system is operational with Israel’s airlines, protecting aircraft flying to destinations where Israeli airliners could face potential threat of MANPADS.

The other is a follow-on contract from an Asian customer, acquiring the Mini MUSIC systems for the customer’s Blackhawk helicopter fleet. This is the second order awarded by this customer this year. Elbit Systems plan to deliver both systems this year.

Elbit Systems’ MUSIC family of DIRCM systems are under contract for numerous customers worldwide including the Israeli national program for protection of the commercial fleet for platforms such as the B747, B737, B757, B767, B777 and A320; the Italian Air Force for the C130J, C27J and CSAR AW101; the KC-390 for Embraer and the Brazilian Air Force; the German Air Force’s Airbus A400; Blackhawk helicopters for Asian customers, VIP helicopters and other aircraft. 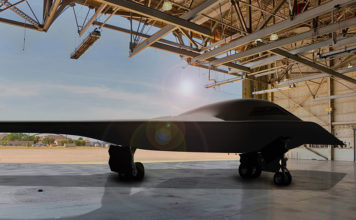 News Desk - Jan 19, 2021
0
The first B-21 Raider bomber is expected to roll out early next year and fly in the middle of 2022. The production of the second B-21 stealth bomber is already underway at Northrop Grumman’s facility in Palmdale, Calif.,